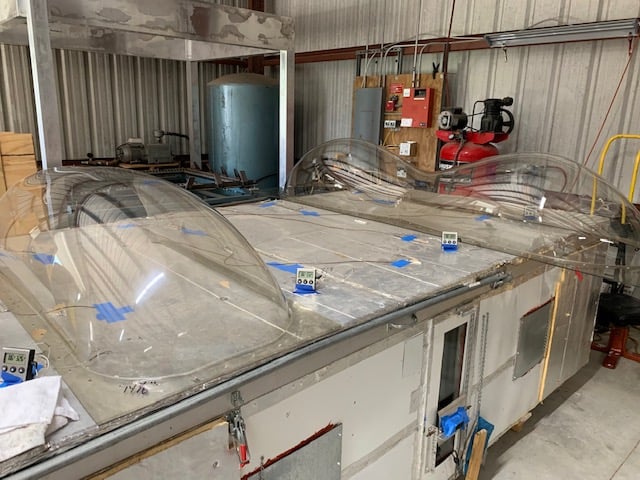 The Spaight Street Syndicate reports in from Florida where Skeeter bubbles are born.

Made a quick trip to Florida to retrieve a replacement canopy for my C-Skeeter. A builder error caused the original to go airborne and shatter during a photo shoot for the launch of “Black Ice,” a new line of extreme weather clothing from Sail Racing International. The line will be in market this fall. Sail Racing

Meet Charles Stence, aka, Bubble Man. He runs an airplane maintenance service in Indiantown, Florida and makes canopies for experimental aircraft as a side business. If you need a canopy, give him a shout. He has exceptionally high standards, good pricing and is an excellent communicator. It was a pleasure dealing with him. Aerocanopy. 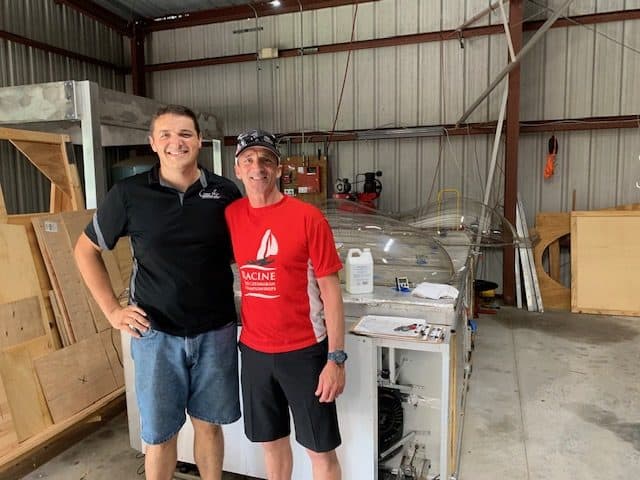 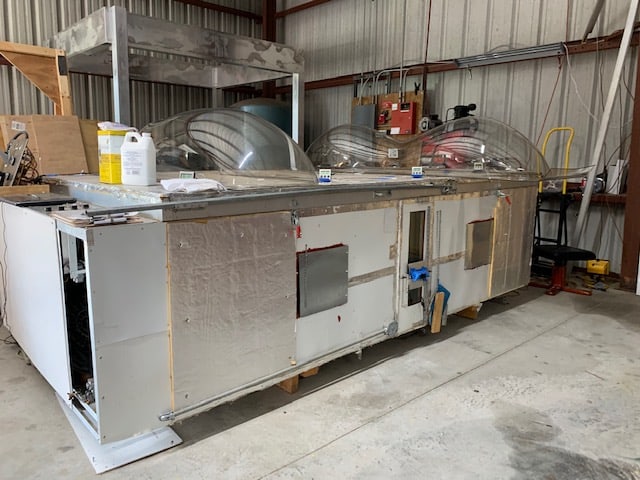 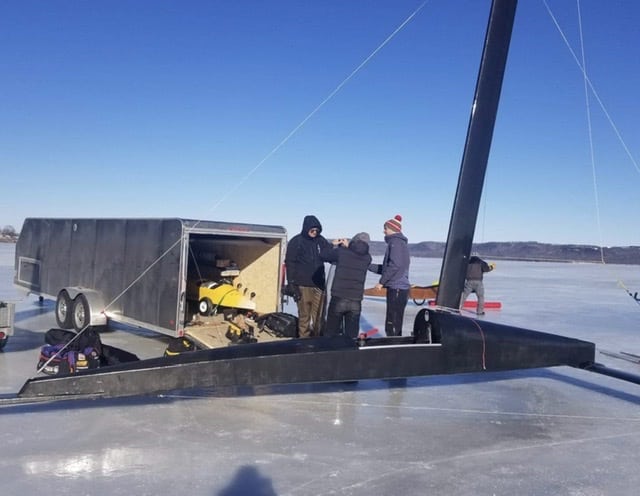 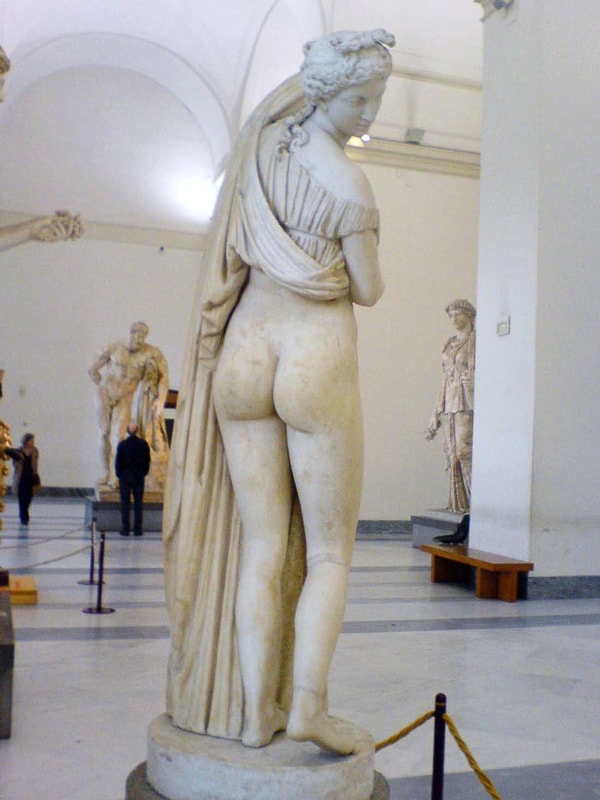 Previously at the Spaight St. Syndicate
Daniel Hearn is inspired to name his C Skeeter by, well, read on…..

What’s In a Name

“What, are you thirteen,” she said rolling her eyes? I had to take a quick mental inventory. Let’s see—I still think there’s nothing funnier than a fart in church. I have many names for my male member, and each includes an adjective found on the Thesaurus page for huge. I burp out loud when I think no one else is around. I sometimes forget to put the toilet seat back down. I think Hershey’s is good chocolate. Even though I know I’m not supposed to, I often cut all the food on my plate at one time, because it’s so much more efficient. “Yeah, pretty much,” I replied. “So, what you’re saying is that C-Man is not an appropriate name for a C-Skeeter driven by a man my age who has four children—three of them daughters?” She just walked away, so I took that as an affirmative. Maybe I can still cancel the decal order.

Probably needs to be more sophisticated to win the approval of my Mrs. I hadn’t recalled asking for her approval, but nonetheless, it became clear that she thought she had a vote. I had carved up the districts within our household trying to prevent that, but clearly my gerrymandering was ineffective.

Maybe something from literature? The classics? Or how about mythology? Those Greeks were so sophisticated they convinced people to see pornography as art. I think the sculptors were just as juvenile as me. Their wives were certainly rolling their eyes when the Mr. was out back in the shed chiseling the fine form of a woman with a righteous amount of junk in the trunk.

There must be a cool-sounding “C” name in mythology, with deep meaning, that would be a fitting reflection of my masterpiece. (Well, it may not be a masterpiece, but it’s the best this paint-by-numbers kind of guy can do). That’s it—Callipygian! I think it’s perfect. And I’ll score points with the Mrs. when I tell her that I named the boat after her. But this time, I’m not disclosing the name until the fat bottomed girl hits the ice.

Now that you’ve Googled my name, let me know what you think. Will I be sleeping on the couch again, or will she be flattered by her juvenile husband of 32 years? 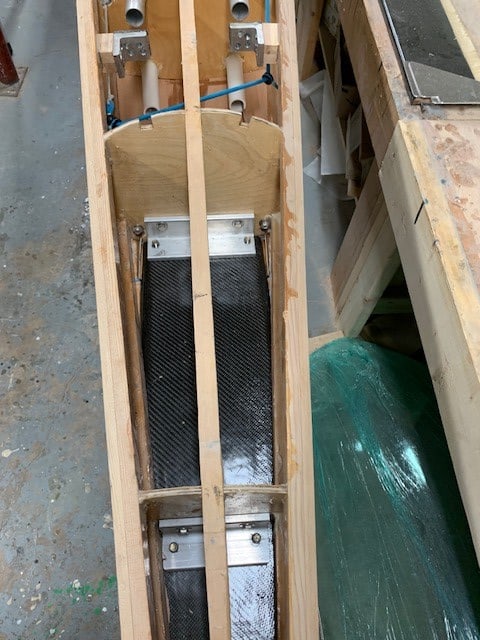 That Thing Got A Hemi?

You’re about the find out.

No hemi, but all sorts of other, hopefully, go-fast stuff under the hood.

Springboard attachment brackets. Not fast if your springboard falls off. First time I ever sailed an iceboat was Donny Anderson’s Nite on Lake Kegonsa. Springboard fell off. I didn’t know there was hazing before I joined the fraternity.

END_OF_DOCUMENT_TOKEN_TO_BE_REPLACED 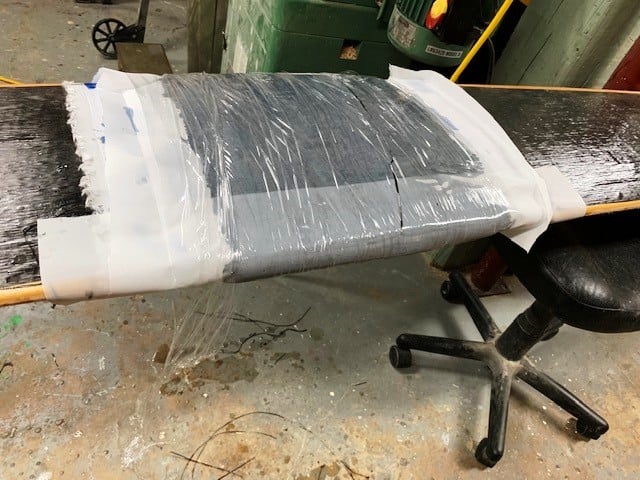 A Space for Cowboys

After a short break, Daniel Hearn is back in the saddle, so to speak, with his C Skeeter basement build.

Yeah, I know, it’s been awhile since my last update. In between that work thing and summer pursuits, my time blocks for the shop are short and less frequent, but I’ve been chipping away at the iCe rocket. (No, that’s not the boat name, but it will be a subject of a future blog). My internal mechanicals are now complete, and I’ve been doing lots of sanding on the cockpit carbon to make it look all purdy. I’ll give you the full tour in my next blog.

My nightly ritual this week has been laminating carbon to form the “saddle” which will attach my rocket to the launch pad. At the center point of the plank I laid out a layer of peel ply, then formed the saddle around the plank. I lost track of how many layers, but it was a great way to use up my scraps of both uni and cloth, interspersed with full size pieces. My technical consultant advised that the saddle needed to be stronger than the hull itself, so I just kept adding layers each night until I got to a thickness of about 3/8”. Once there, I rough trimmed the saddle and cut a matching profile in the bottom of my hull to prepare it for glue on. After I glue it on, I’ll reinforce the attachment with carbon fillets on the inside and outside of the hull. The outside fillets will cover up the mounting plates for the titanium axle that holds my exit block in position.

It was noticeably cooler this morning for my sun-up open water swim. Ice is a good way off yet, but the seasons are starting to sniffle. This cowboy is excited to break in a wild mare branded M-177! 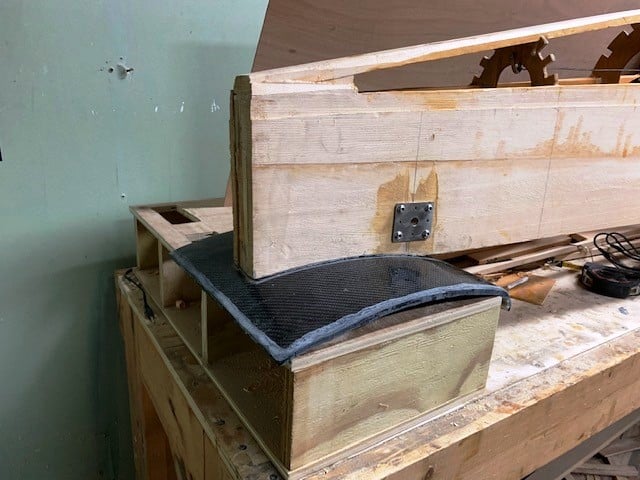 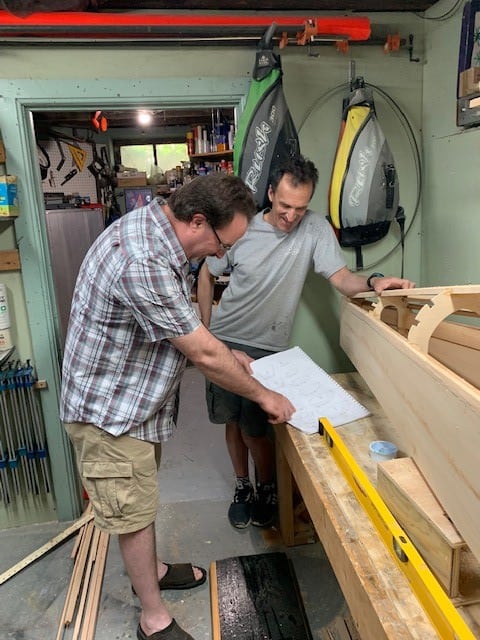 I imagined it would be like Frank Lloyd Wright stopping by to check out our Convention Center. He’d be wearing the half circle reading glasses occasionally glancing over the top and then returning to the precise plans which captured his vision. The pockets of his finely tailored suit coat would be filled with measuring devices—a digital caliper, a laser guided tape measure, an atomic plumbometer—all calibrated by NASA. He’d pace around the structure, all too frequently grumbling a seemingly agitated “hmmmm,” which could only be interpreted as, “did this epoxy sniffer really think THIS is what I had in mind?” I was prepared for a tirade.

The night before, I had that dream where you’re supposed to be taking the final exam, but you realize you never went to class. Not one time. Or read any of the books. I needed something to relieve my anxiety. As luck would have it, a CBD store opened in my neighborhood. The proprietor is an old hippie, who goes by the name “Moon Dart.” He somehow rationalized that cashing in on people’s physical and mental struggles didn’t make him “the man.” Looks and smells like a capitalist to me, but in my hood we’re even left of Bernie, so that’s worse than calling someone the other “c” word. Yeah, that one. I went right for the highest potency, figuring it was like DN runners—more is always better.

Turns out, my anxiety was completely unnecessary. Inspector Heppert was very kind. At least in-person. When he gets a few beers in him, he might have the entire bar giggling like 7th grade girls at a slumber party, showing pictures of my incompetence on his iPad. But at least I won’t be around to hear it. After I slap a bunch of carbon on the outside, most of my infractions will be hidden anyway. And I know a good painter. So, I’m counting on at least “looking” fast. By the way, Moon Dart says the CBD oil is great for stoning runners. He advises stopping at 420. Makes sense.