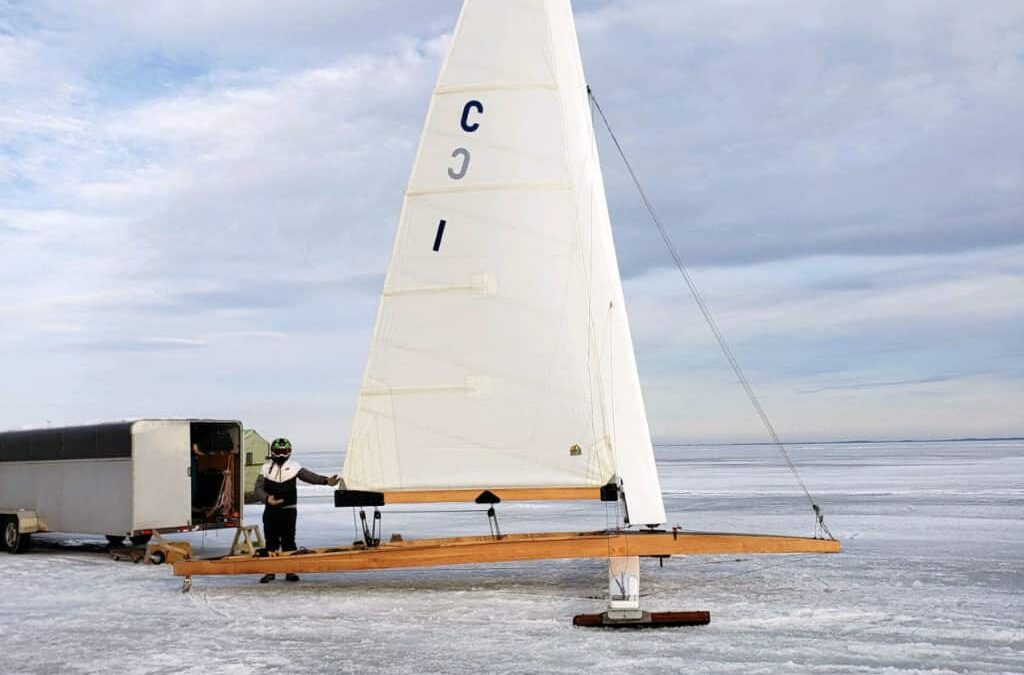 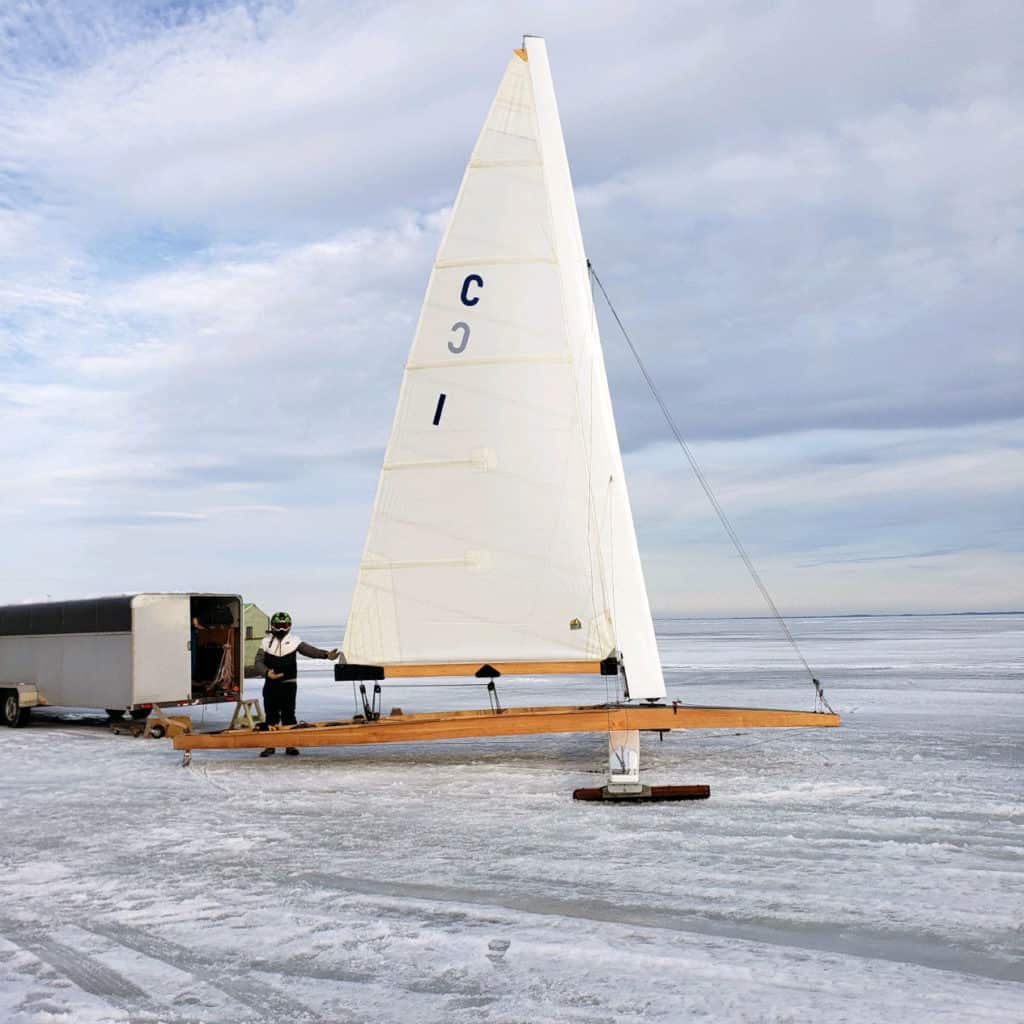 Jay Yaeso designed and built this Stern-Steerer so that his two boys could enjoy ice sailing together. Glad to see that ice conditions at Oconto County Park near Peshtigo, WI enabled FROSTY and the Yaesos to start that journey. Of course Stern-Steerer sailors Mike Kroll and Andy Gratton were there too but off exploring when Jay took this photo. 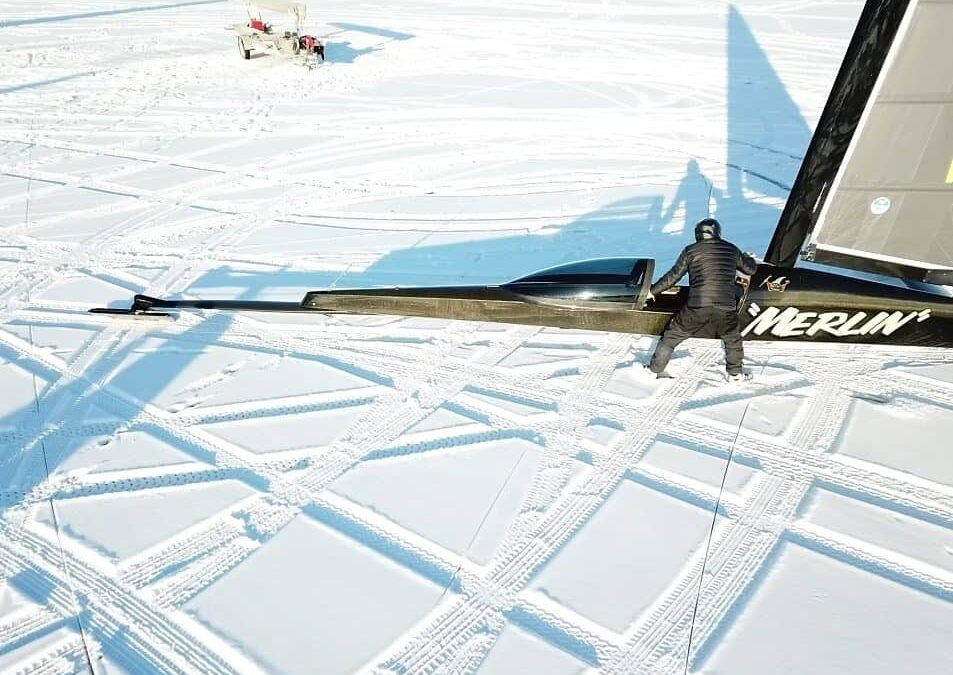 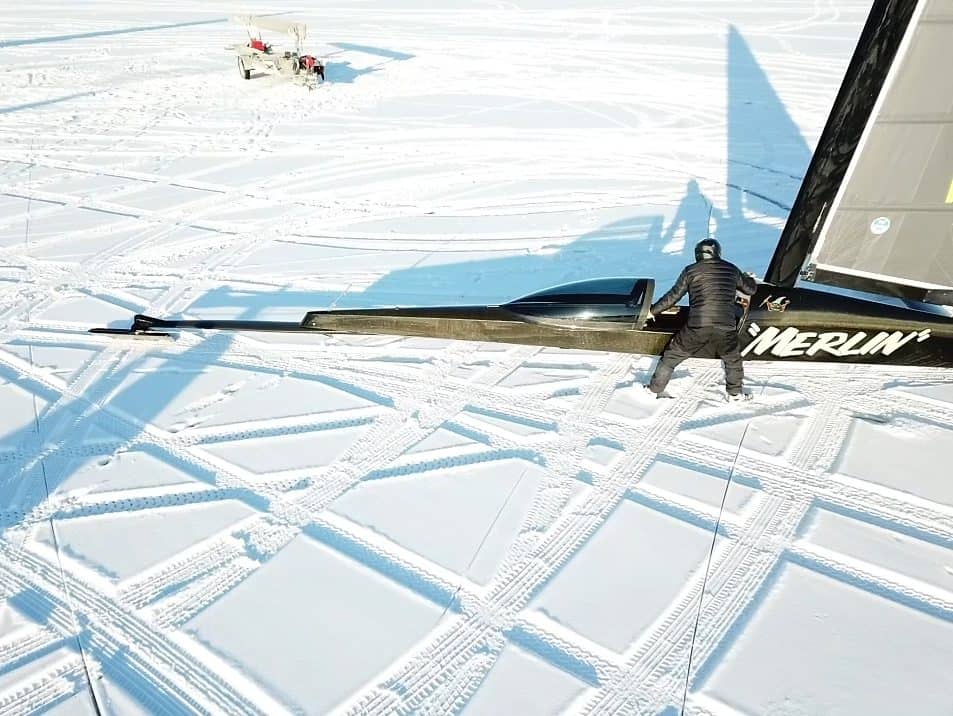 Jim Gluek among the ATV tracks with his Skeeter, MERLIN. Photo by Jonathon Ringdahl. See the rest of his photos here. 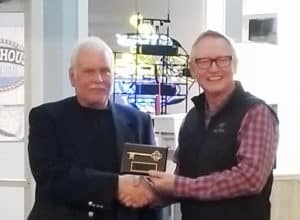 There are a thousand little stories that happen at a Northwest regatta. Watching the magnificent stern-steerers take to the stage brings us back to the roots of this sport. Here are a few random stories from the regatta. And hey, you should plan on going next year!
I’ll post more photos and commentary tomorrow. 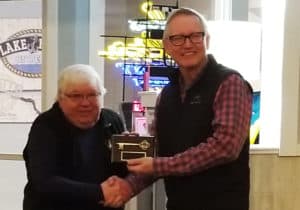 The support that iceboaters receive from the entire town of Lake City is phenomenal. Mayor Mark Nichols has made sure that a porta-potty has been at the landing for the last 3 weekends. He attended our banquet. Saturday night and gave out 3 keys to Lake City (Steve Schalk, Joe Norton, and myself) that recognized our efforts as regatta volunteers. Not only that, but he sailed out to the course on Saturday in his DN and raced! Think about that, how many mayors do you know of that sail iceboats? 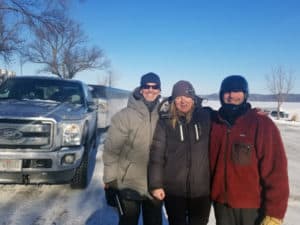 There are 4 of us who have attended all 3 regattas in Lake City this January (the DN Western Regions, the ISA, and the NIYA) :  John Dennis, Jim McDonagh, Steve Orlebeke, and myself.  JD & Jim McDonagh have spent more than half of January on Lake Pepin checking ice and sailing. 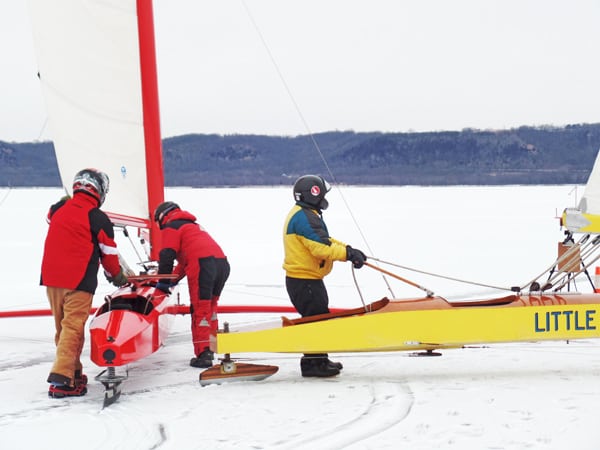 The Davis stern-steerer family never miss a Northwest regatta. John was thrilled to only have a 3 hour drive this year, the closest the regatta has ever been held to his home in Clear Lake, Iowa. 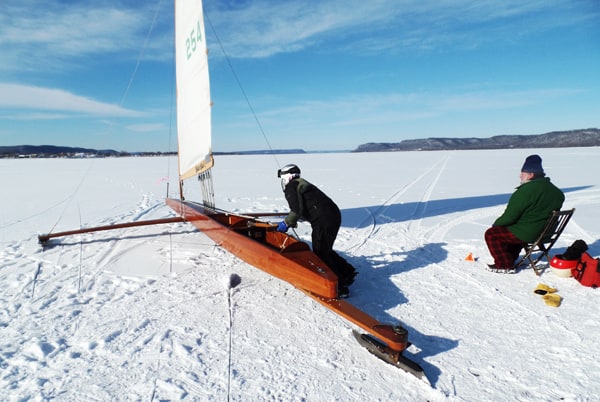 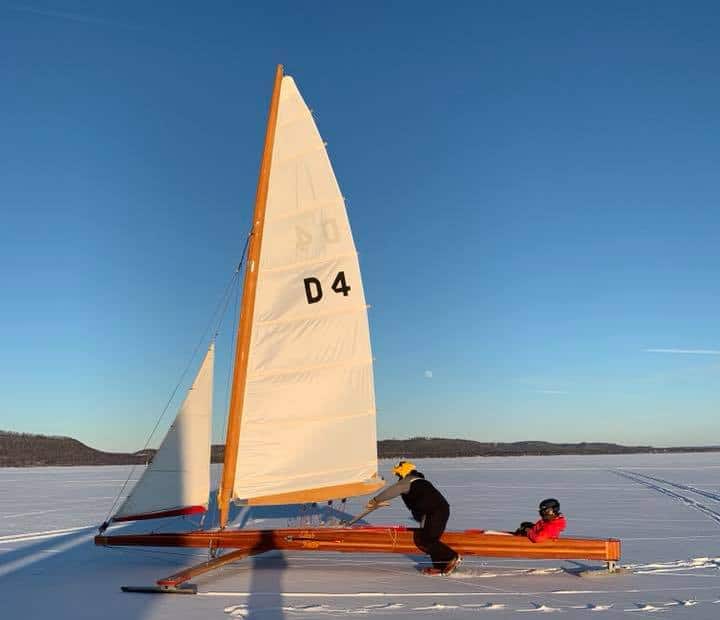 Stern Steerer fanatic Mike Kroll gave soft water Minnesota sailor Gretchen Wilibrandt a ride in his D Stern Steerer. He handed the tiller over to Gretchen and she drove it like she owned it.  Could there be a new stern-steerer sailor at the next WSSA?

Iceboating White Potato Lake with Andy Gratton, Dave Lallier, Mike Peters, Mike Derusha. Also Robbie and Bob Everhard from Oshkosh showed up with a Nite. We had DN’s, a Lockley Skimmer, and my small Stern Steerer. The wind came up quit nice and See if you can guess who was sailing the stern-steerer Sunshine when only 2 runners were on the ice. Fun time had by all. Great day of sailing! 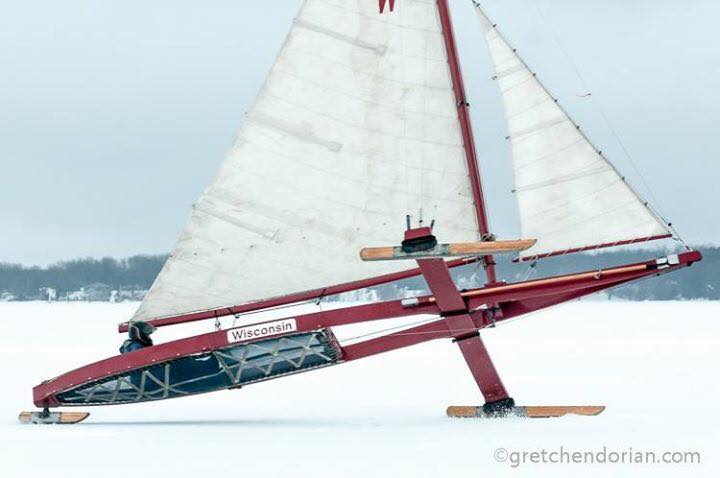 A great day of sailing on Lake Winnebago! Andy Gratton and I set sail at 10 am this morning, sailing the famous Wisconsin, from Oshkosh on one of the best Lake Winnebago excursions ever.

We headed south to David L Lallier’s house in mind for our first stop. As we passed the wayside, we saw 2 sails near shore. We sailed into the way side to find Mark Wiener and Dan Tess sailing DN’s. After a brief chat we continued on to Dave’s house. Mark and Dan followed. We arrived at Dave’s house to find him working in his shop. After a slight arm twisting, he decided to come sail with us. He sailed Mr. Dass. His friend Rob showed up and sailed Ella. I was told both those boats are Don Ward built boats. George Gerhardt also showed up at Dave’s House. At this point George hopped in Wisconsin with Andy and I sailed with Dave in Mr. Dass.

What great fun. We all sailed the south end of the lake for awhile and ended up at the FDLYC. I took my spot back on Wisconsin and we parted ways. Andy and I headed north with the intent to make it to the north shore. After navigating the cracks and rough ice we ended up turning back for Oshkosh at Garlic Island just north of Oshkosh at around 3 pm. We figured we would run out of daylight if we continued North. We made it back to Oshkosh around 4 pm. I rigged the Flying Cloud and we continued to sail in the bay until after dark. We needed 10 more miles in the bay to reach our goal of 100+ miles. We sailed a total of 102.6 miles. After this long and fun filled day of sailing we walked off the ice to the SSIYC for a well deserved fish dinner and a couple of beverages. Words just can’t describe the memories this day of iceboating I will have forever.

WISCONSIN on Lake Winnebago in 2017 in similar conditions. 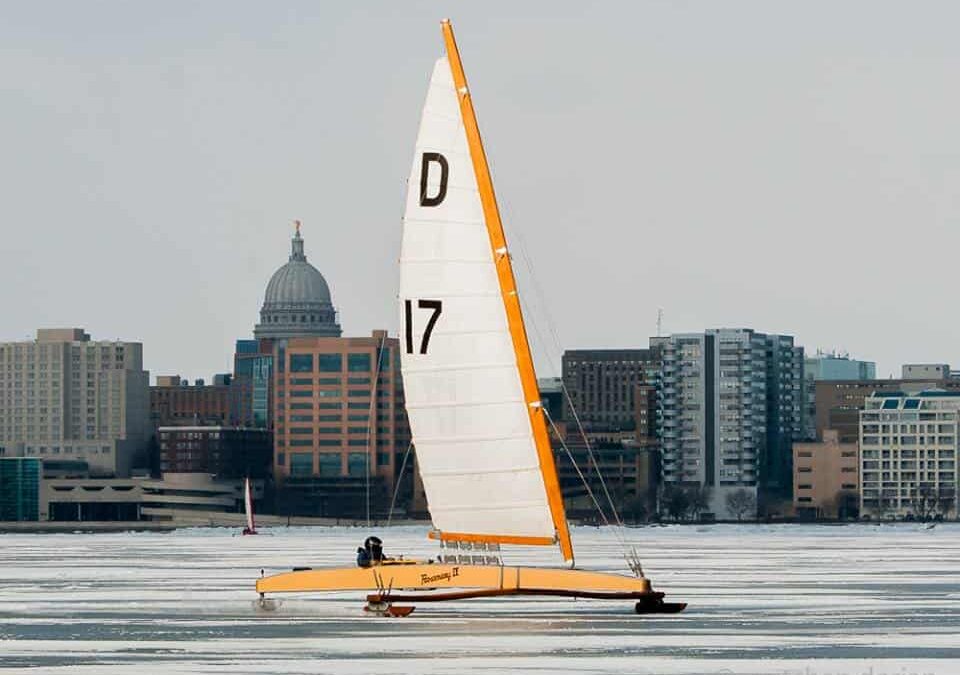 Throw Back Thursday: The Day ROSEMARY Tipped Over

Many thanks to stern-steerer skipper Michael Kroll for posting a link to Andy Gratton’s story from this website on his Facebook page. Andy’s story about the legendary Oshkosh stern-steerer skipper, Don Ward, gets better with every reading. Michael writes, “I have read it many times, and when I see it, I can’t help but read it again because I’ve been in the back cockpit of this iceboat.”

The Day Rosemary Tipped Over.
© 2009 Andy Gratton
The 1992 NWIYA race was called on for Oshkosh. We had beautiful hard ice, except for
the typical crack in the bay. Nubs Salzsieder and I were discussing the upcoming
weekend, who was coming, etc. The usual plan for hard ice was that I would sail the
Timber Boat and he would sail Rosemary IV. We talked more about the boats, how Don
Ward had built so many, including the Rosemary boats, and how Don was always
interested in what was going on in Oshkosh, his home town. So Nubs called Don Ward
and told him to get on a plane and get back here from Washington State so he can sail on
his home ice. We didn’t really expect Don to do that, but a day or two later Nubs
informed me that Don would be sailing his old boat, Rosemary IV, and Nubs would be
sailing the Timber Boat. I was bummed because I had no other boat to race, so instead I
would help wherever needed.
END_OF_DOCUMENT_TOKEN_TO_BE_REPLACED