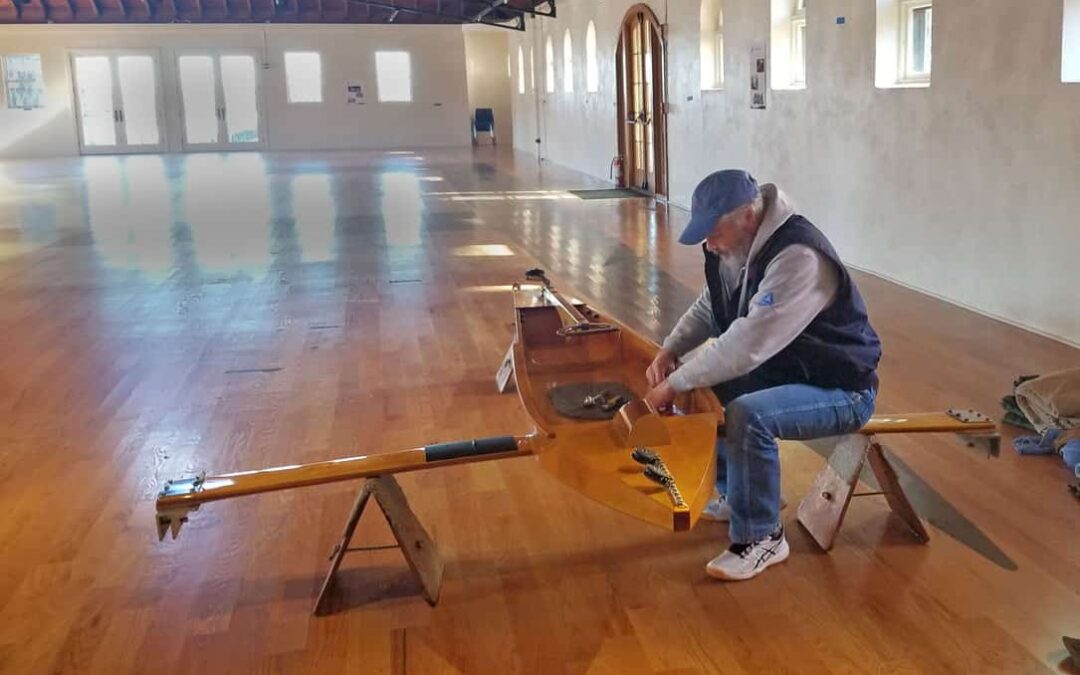 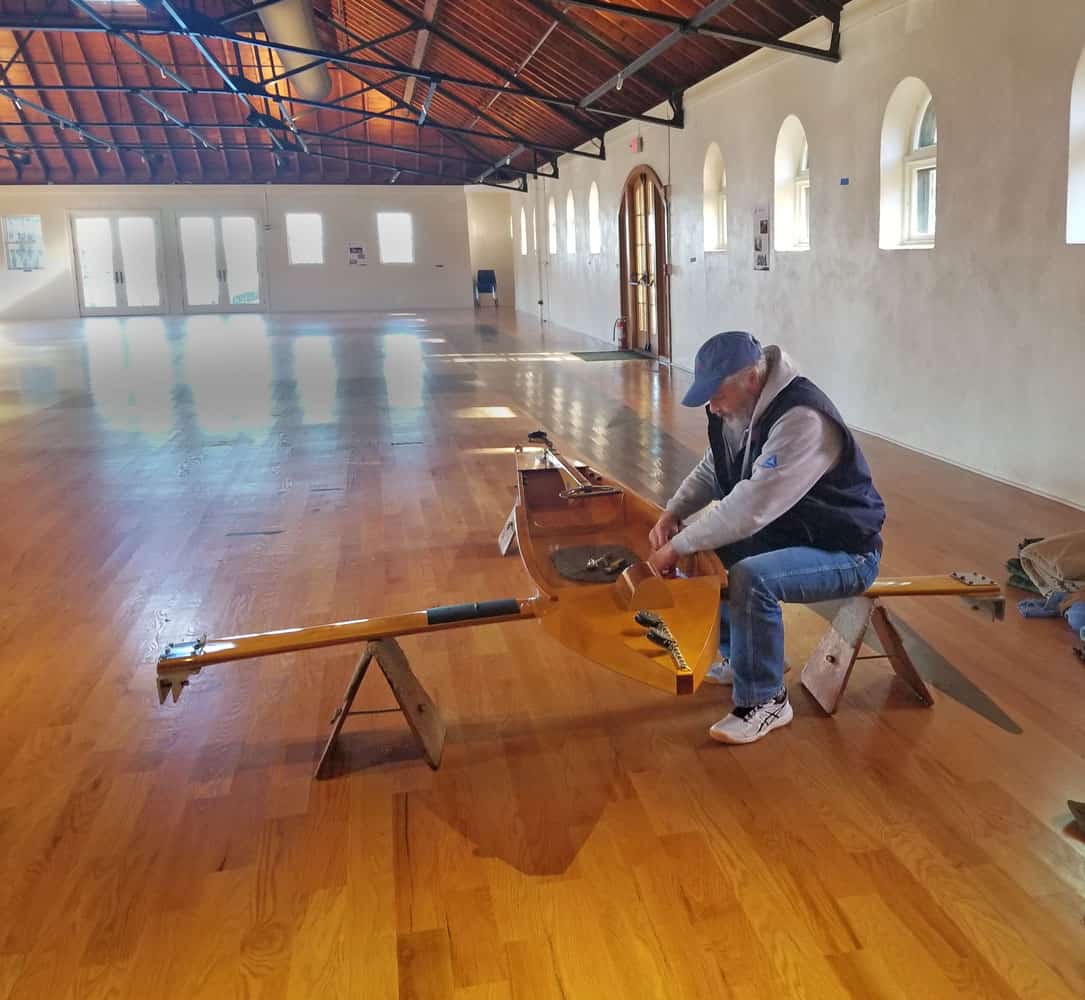 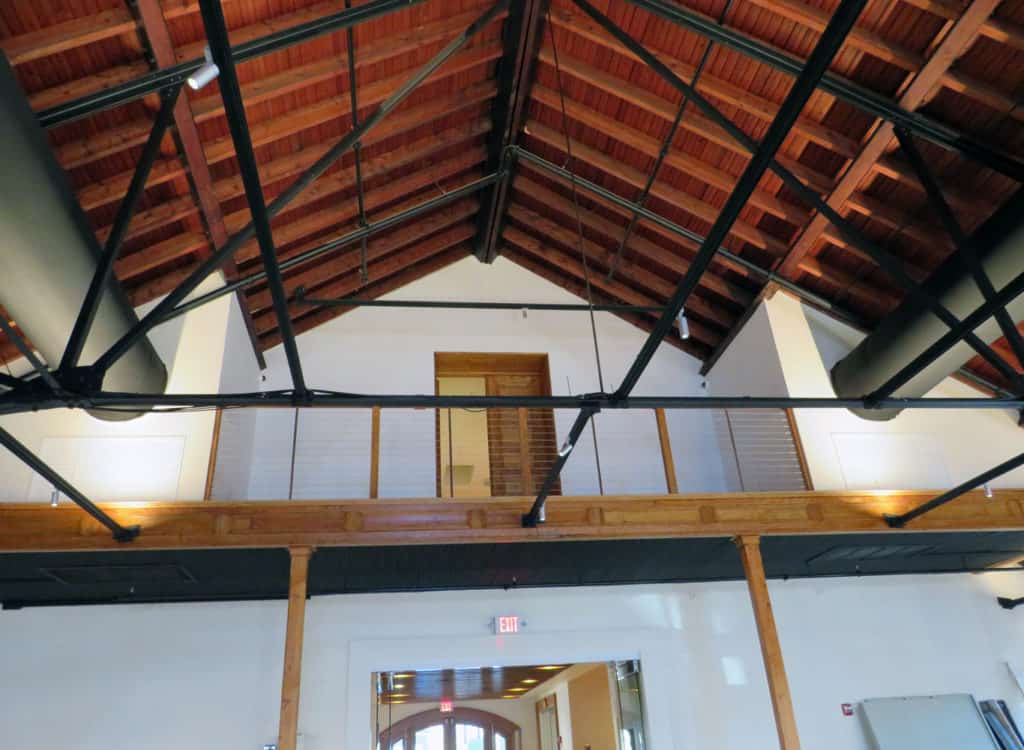 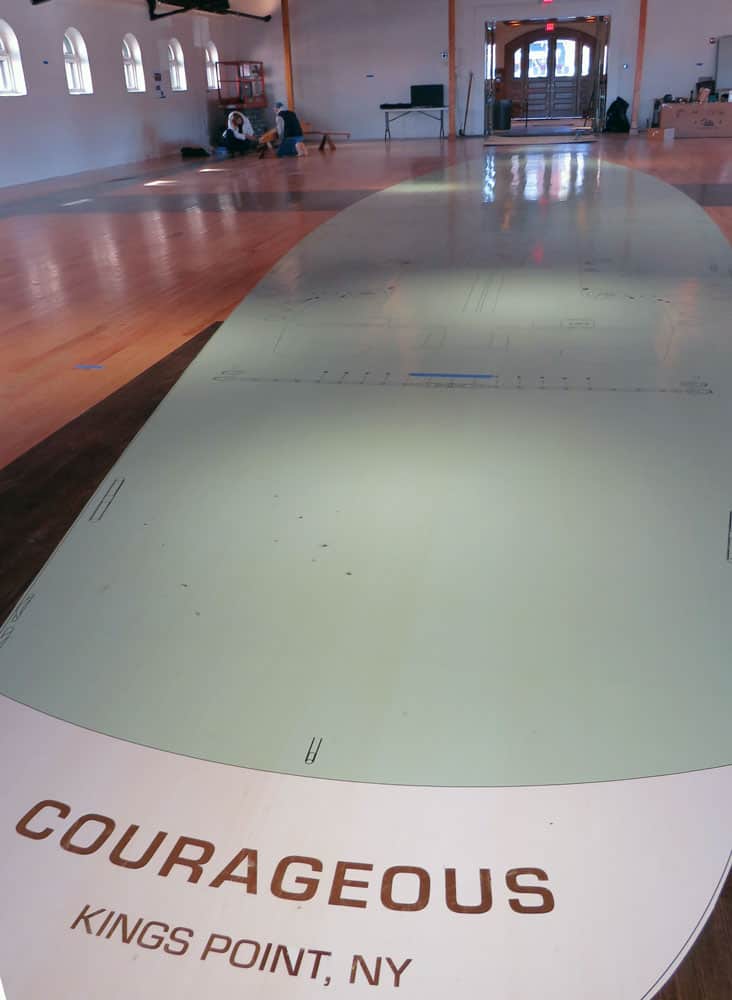 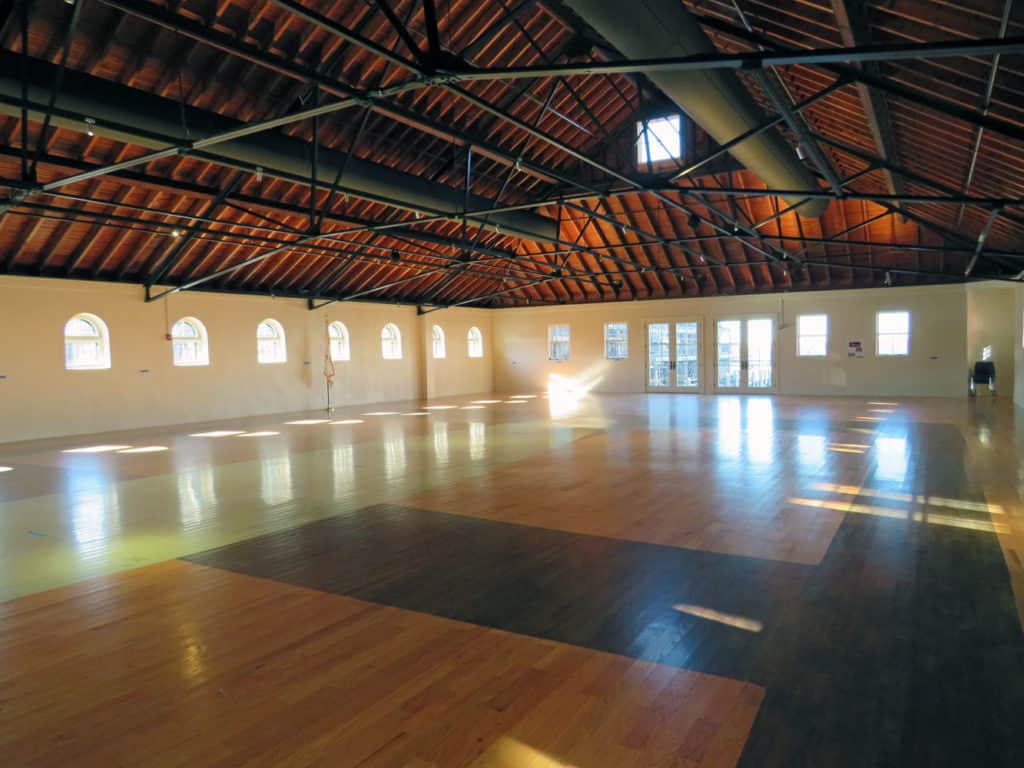 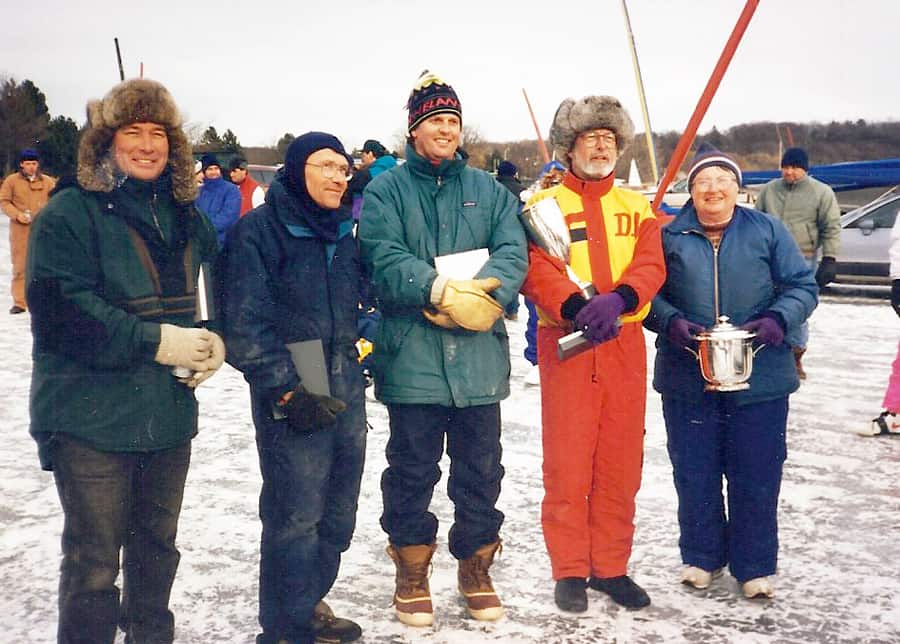 Previous: Jane Pegel To Be Inducted into the National Sailing Hall of Fame

The National Sailing Hall of Fame induction ceremony was held last weekend in Newport, RI. Watch the Hall of Fame Induction Facebook Video (Jane’s induction starts at 1:28.) Jane and Susie could not attend the ceremony but Jane’s remarks were read by another inductee and friend,  Lynn Jewell Shore. Congratulations, Jane.

I am pleased to be inducted into the National Sailing Hall of Fame and disappointed at not being able to be in Newport this weekend. It’s a true honor to join the ranks of the nation’s top sailors.

Growing up on Lackey Drive in Williams Bay, Wisconsin, sailing was the neighborhood “thing.” As a first generation sailor, I learned how to sail by the trial-and-error method. Those in the know around Geneva Lake told my father Dr. Clifford Wiswell what sort of equipment I should have whether it be sailing equipment or iceboating equipment.

I learned many valuable lessons competing against great sailors and watching great sailors in action. Having a husband who was a master boatbuilder and sailmaker certainly helped my race results.

I consider Bill Buchan the ultimate role model for sailors seeking to become champions. He worked hard to perfect his equipment as well as his sailing technique. He always sought to be ahead of the curve and his results in the Star class reflect his dedication to the sport.

Iceboating was always #1 for me for more than 60 years. I raced in the Skeeter and DN classes, and served as an officer and committee member in many iceboat organizations.  For more than 40 years I served on the National Iceboat Authority, writing and analyzing the rules that govern iceboat racing. I am proud to say I mixed the epoxy when the stern-steerer iceboat “The Deuce” was rebuilt roughly a decade ago. (“The Deuce” is the world’s largest iceboat.)

I have watched many generations of sailors coming up through the ranks through my involvement with the Lake Geneva Yacht Club and Geneva Lake Sailing School. The tradition of champions coming from Lake Geneva is being carried on by Laser Radial sailor Chapman Petersen and others.

Thank you again for this honor. By the way, I’m not related to the Johnson Boat Works family in White Bear Lake, Minnesota. Most of my relatives hail from Walworth County, Wisconsin or Grand Rapids, Michigan.

P.S. Many thanks to Lynne Jewell for representing Jane at this ceremony. Jane and Susie enjoyed racing against Lynne in the Laser class over the years.

National Sailing Hall of Fame members and ice sailors- from Left: Peter Harken, Jane Pegel, and Buddy Melges “All kings and queens are not born of royal bloodlines. Some become royal because of what they do once they realize who they are.” Pharrell Williams

Previous: Jane Pegel To Be Inducted into the NSHOF
A celebration to commemorate Jane Pegel’s induction into the National Sailing Hall of Fame was held at the Lake Geneva Yacht Club on Sunday, August 27th.
Susie Pegel reports:

Those in attendance at Jane’s party August 29th at the Lake Geneva Yacht Club included folks from Lake Geneva, Delavan, Madison, Pewaukee and Green Lake. And there was a surprise guest appearance from former DN world champion Mike O’Brien who flew in from New Jersey to say “hi.” Flowers had previously been sent to Jane from former DN world champion Henry Bossett. Mauretta Mattison sent regrets that she and Bill would be unable to attend the party. Many thanks to all the iceboaters who sent messages to Jane wishing her well and congratulations.

Excerpt from email sent to Jane from Dan Heaney:
“I am honored to be invited to the celebration of Jane’s selection to the Sailing Hall of Fame. I will miss the opportunity to hear the wisdom expressed by Jane regarding sailing, both hard water and soft water. Jane’s comments, especially those directed to my attention were always welcome and a positive contribution to my efforts as a race manager for the IDNIYRA. I look forward to the opportunity to see Jane in the future and will make it a priority to contact her and yourself on the occasion I have to be in Lake Geneva….we raise a toast to Jane in congratulations for being recognized for all the contributions made to the sport of sailing and the influence she has had on the sailors who have been lucky enough to meet her.”
Dan Heaney, Neenah, WI 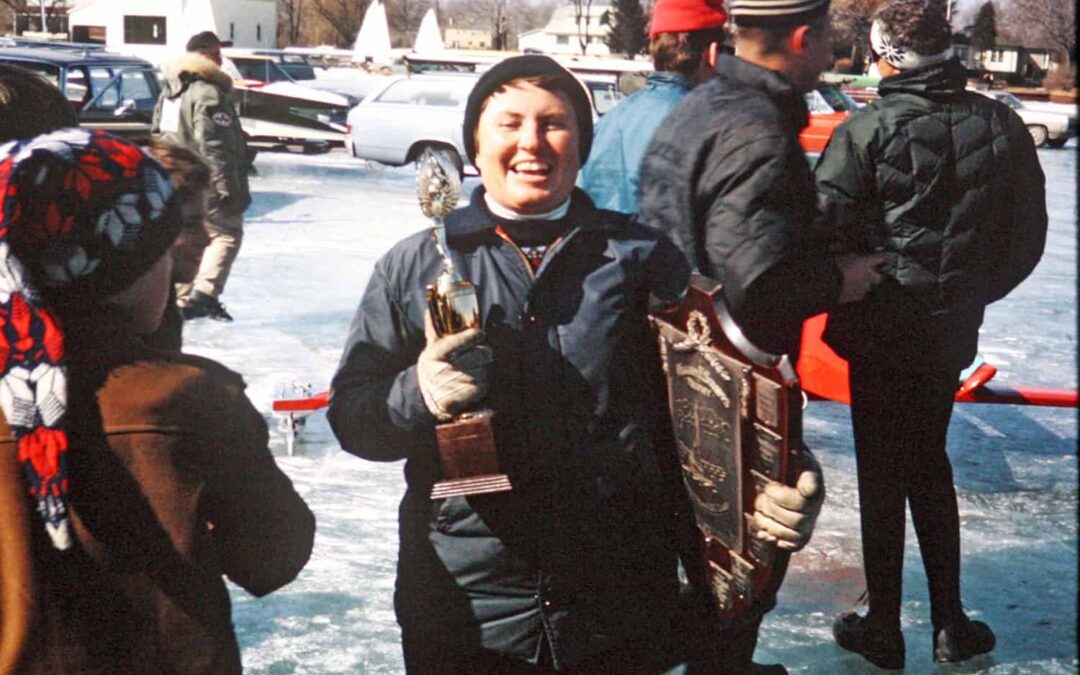 Jane Pegel To Be Inducted into the Sailing Hall of Fame 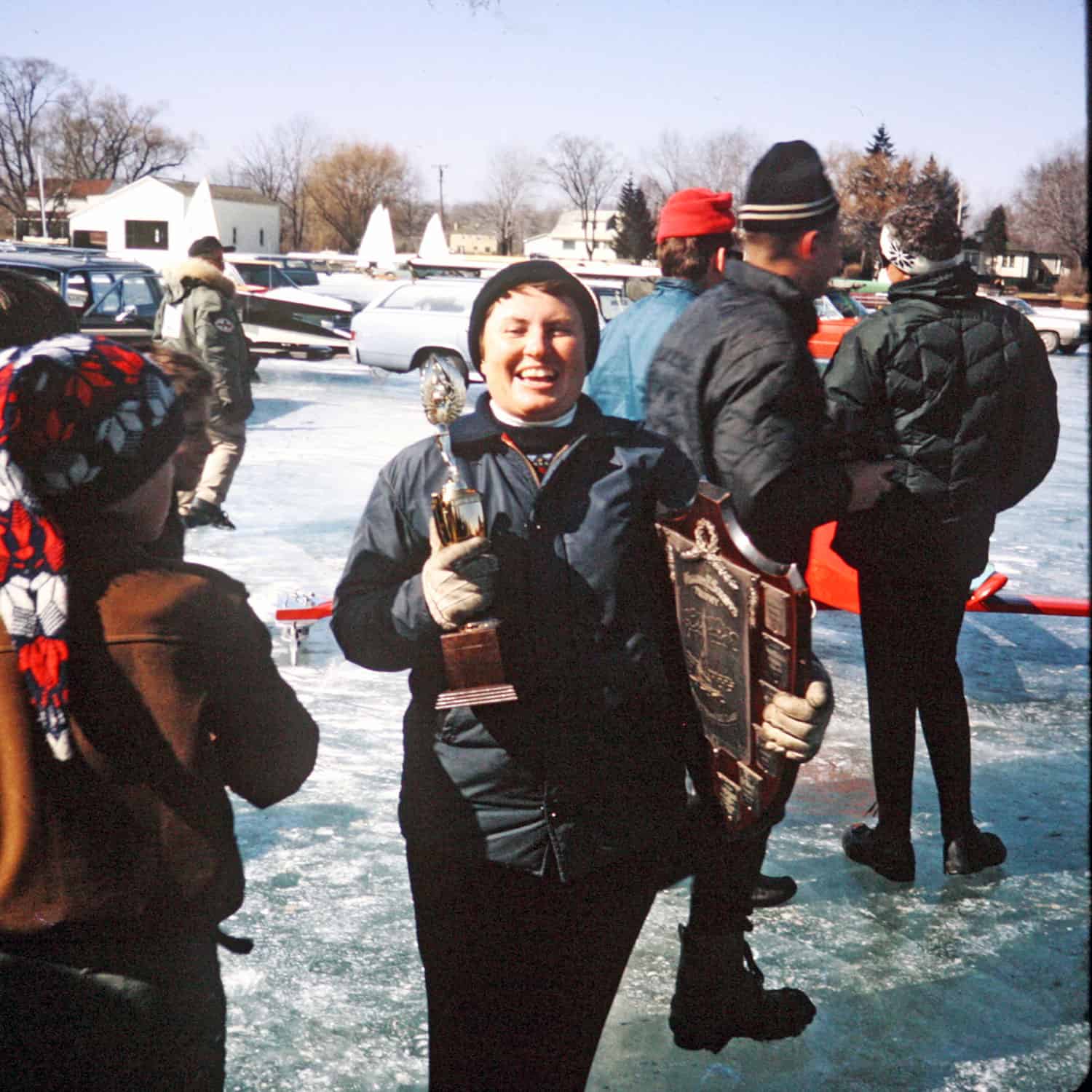 Jane Pegel has owned a series of ice boats and speedy scows that have all been given colorful names. People notice boats with interesting names especially when the boats are at the front of the fleet. Jane Pegel has been a champion sailor from the Midwest since her earliest days. She has also taught thousands of aspiring young sailors to improve their skills. Her first ice boat was named “Holy Smoke”. Pegel’s C Scow was named “Calamity Jane” and her legendary E Scow was named “Frozen Asset”, a phrase every sailor can appreciate. Pegel started sailing early in life and was the descendant of a line of sailors. Her grandfather, John O. Johnson, started the Johnson Boat Works on White Bear Lake, Minnesota in 1896. He was the original builder of the A Scow, a 38-foot flyer that impressed all the participants racing for the Seawanhaka Cup.
Continue reading Jane’s biography on the National Sailing Hall of Fame website.

If you missed it last Saturday night, the National Sailing Hall of Fame has kindly made available the induction ceremony on YouTube. The embedded video begins with Peter Harken’s introduction of Bill Mattison. You’ll see many familiar faces in the photos and hear from Bill’s wife, Mauretta, a driving force supporting Bill’s passions for the water and boat shop.