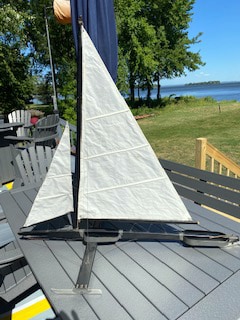 One More Model: ACE OF SPADE 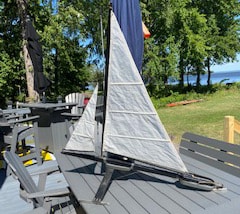 UPDATE SEPTEMBER 7, 2020: Mike Butler corrects the record:“Just a couple of corrections. The boats name is really the Ace of Spade. Not sure why that was. It was not built for my dad. Connie Korsmo built it for my great uncle Ray Butler who worked with Connie at Madison Kipp. This would have been around 1935. Ray gave it to my dad after the war.

He built the new hull, that Mike has now, in the 50’s after he boom jibed the boat and damaged the hull.
The attached photos are of the original hull. I still have the blueprint of that boat. Jack Ripp took the photos.
Jack took a lot of photos over the years and I got together with Jack and dad shortly before he died. Spent an afternoon going over lots of Jack’s pictures. Hopefully someone still has them.”

Peter Fauerbach noted that Connie Korsma was the chief engineer at Madison Kipp Corporation. “The Kipp” as it’s often called here produces machined die castings and has been in operation since 1898.

Here’s another beautiful iceboat model from Mike Butler up in Oshkosh, WI of his dad Dave’s C Class Stern-Steerer ACE OF SPADES. When Jerry Simon asked the late Jack Ripp about the boat’s lineage, Jack told him Connie Korsmo, who worked at Madison Kipp, built 2 Hudson River style C Class Stern-Steerers, one for himself and the other for Dave’s uncle, Ray Butler,  Sometime later, Dave added a new cockpit backbone, likely for comfort. Dave Butler was a life long 4LIYC member who served as a officer and was inducted into the 4LIYC Honor roll in 2012.

And the ACE OF SPADES? Just look for the bright orange/red stern-steerer at any regatta. She’s currently owned by Mike Peters. 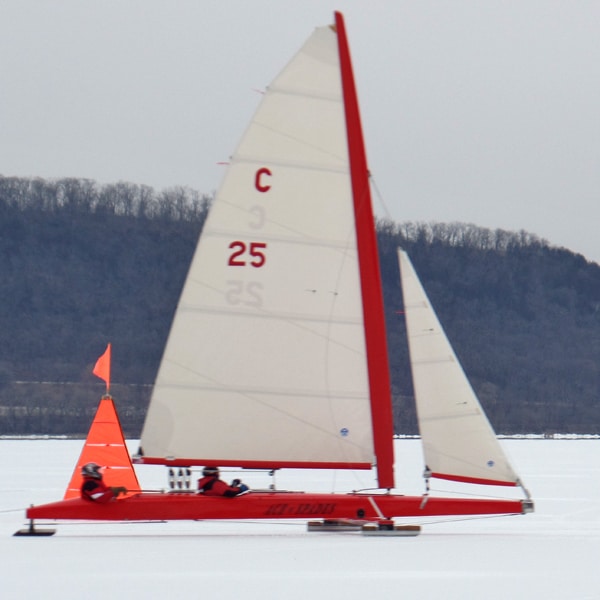