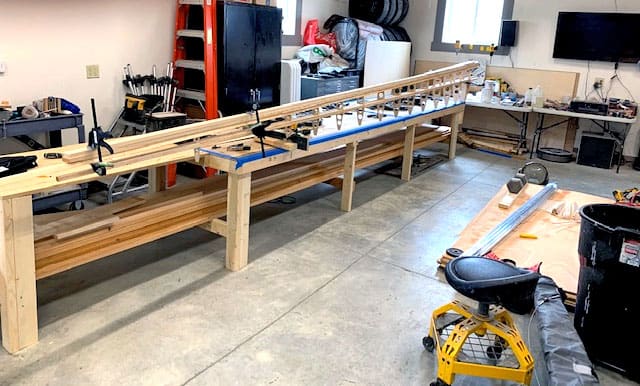 UPDATE: The incorrect photo (now below) was used in the original post. The post has been edited with the correct photo.

It’s always good to surround yourself with people who are smarter than you. With the C-Skeeter, I buddied up to Pat Heppert, and so far, he’s still taking my calls and responding to my texts and emails. When I got intrigued with fixed wing boats, inspired by Dan Clapp’s W28, I reached out to Wing Wizard, John Eisenlohr, who lives in Montana. I had the pleasure of meeting John and some of the other Montana Ice/Dirt Cowboys on our last trip to Fort Peck. Before I knew it, my W28 wanna-be with DN parts had morphed into a 18 ft. tapered wing and flap, with 30″ removable top sections. Plus, a largely enclosed 13 foot hull, 6 foot springboard, and a 12 foot wide plank. I think they call this phenomenon, “project creep.” What is it with iceboaters, anyway? In the immortal words of Dan Clapp himself, “it’s not like we’re racing!”

Here’s a shot of my main wing as it sits now. I’ve just installed the leading edge pieces, but have yet to shape. My hinge boxes are also ready to be installed on the appropriate ribs. After that, I’ve got some additional internal reinforcing to do, and it’s on to skinning. John normally installs the leading edge blocks after the skinning, using ropes with tourniquet-type devices. I decided to mount leading edge blocks first, so I could just use clamps. Guess I’ll find out if this makes the skinning more difficult. 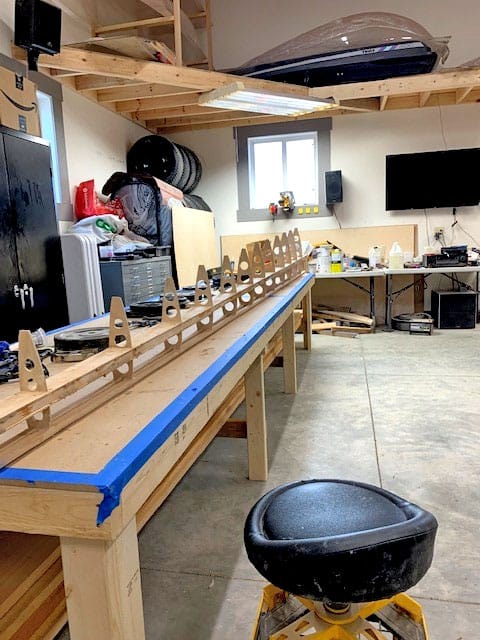