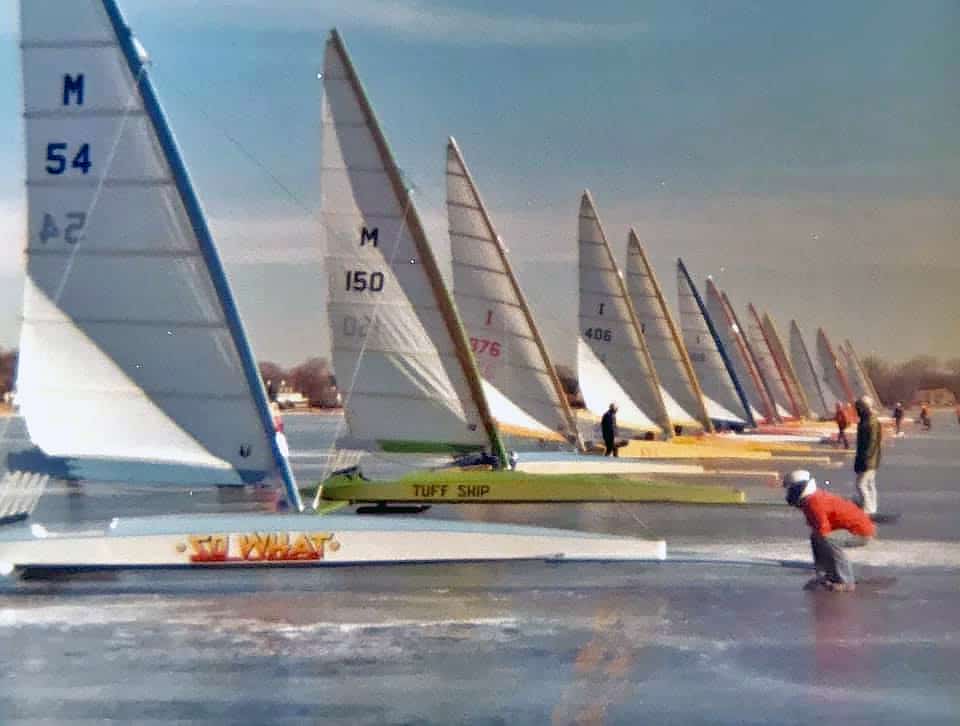 Class E Skeeters line up to race at the 1976 Northwest Regatta on Lake Mendota in Madison, Wisconsin. Photo: Greg Whitehorse

Greg Whitehorse posted this on the 4LIYC Facebook page.

Mid-70’s Northwest Regatta on Lake Mendota.
You are looking at just one side of the starting line, so I’ll guess there are probably 28, maybe more, Class E* Skeeters in this race. M-54 is Gary Sternberg’s “So What,” but I think Vic Whitehorse is at the helm for this race. That would be Dave Nelson’s M-150, “Tuff Ship” lined up next. Racing in the Skeeter class with 30-40 boats on the line was a blast back in the day.

Between the late ’60s and early ’70s, I believe club members helped build ten or more Class E Skeeters in Dave Rosten’s basement. It wasn’t unusual to see Dave, Paul Krueger, Bill Mattison, Jack Ripp, the guy who the boat was being built for, and a host of others all helping out. It was an incredible time.

Skeeter Ice Boat Club’s Sparky Lundberg aced out Paul Krueger for the Class A Skeeter win that year. It may have been the first year for PK’s rear seater.

The International Skeeter Association designates bow-steering Skeeters Class A as “Single place yachts, or two-place tandem Whose mast, when measured along the mast, does not exceed 28’-6″ from the deck to top of mast, including all mast and deck hardware.” Class A Skeeters carry a maximum of 75 square feet of sail. However, when Class A Skeeters sail in the Northwest regatta, they are listed as “Class E.” (When I was a kid, I thought the E stood for “Experimental.”)