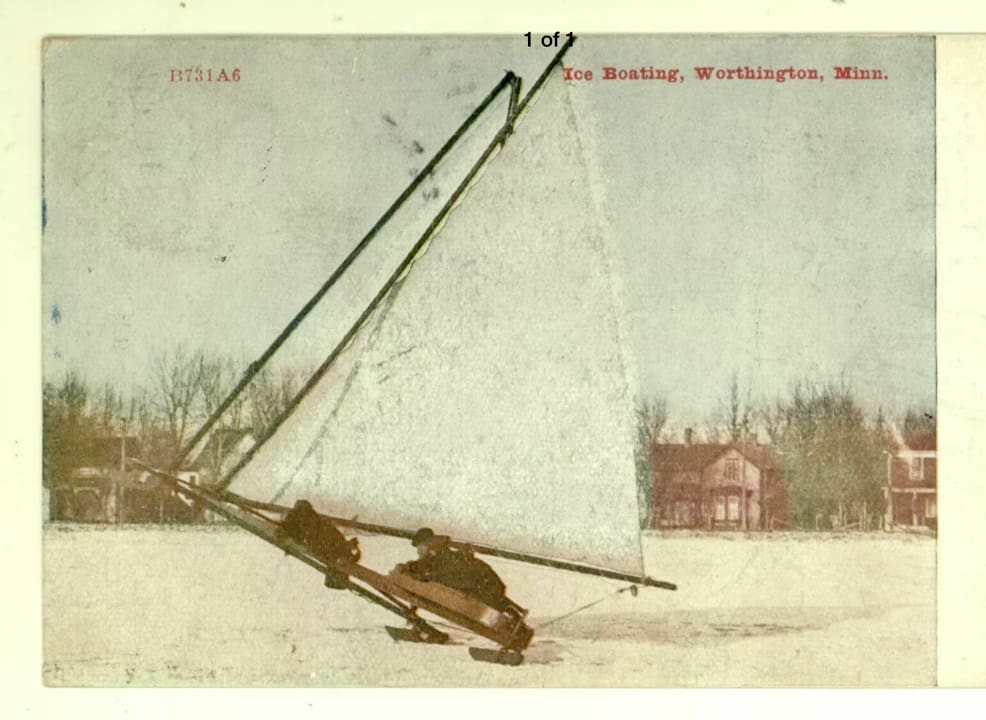 An example of a lateen rigged stern-steerer with an A-frame style mast.

Wisconsin Stern-Steerer Association Secretary Andy Gratton passed along this story from Steve Maniaci of Michigan about Little Bay de Noc and a stern-steerer with an unusual mast.

That capsizing photo (see “Who Did It Better?“) brings back memories on Little Bay de Noc, back in January of ‘69. My girlfriend and I were in my dad’s four-place stern steerer, going east and west along the leeward south shore of Gladstone’s waterfront with a strong north wind. Things were going well until I went beyond the power plant point and caught the full broadside blast of wind coming unimpeded from Rapid River.

We went up and over in a heartbeat. Thankfully, my girlfriend was wearing an insulated snowmobile suit that cushioned the blow. I was never so thankful for my old motorcycle helmet as that day.

I don’t know what the technical name is for that type of mast. We just called it a wishbone mast. The two parts of the wishbone were anchored to a metal bracket on the cross plank and were quite a ways out towards the runners. They came together with a metal bracket that held a large pulley for the mainsail halyard. The masts leaned forward and were held in place by two metal bars anchored to the nose bracket that also anchored the guy cables to the plank to the nose.

My dad bought it in the mid-’60s from Atley Peterson, an old Swede from Escanaba. Atley and his family built it, and he said they had clocked it at 90 mph back in the ’40s. The solid wood beam that makes up the body that everything attaches to has weakened with age and is no longer safe. The last time I sailed, it was on Little Traverse Bay in the late ’80s.

Iceboating is exciting and exhilarating, but it is so loud. I much prefer sailing my Boston Whaler Harpoon 5.