Iceboating’s Spookiest Story: The Strange Tale of the Ice Soar 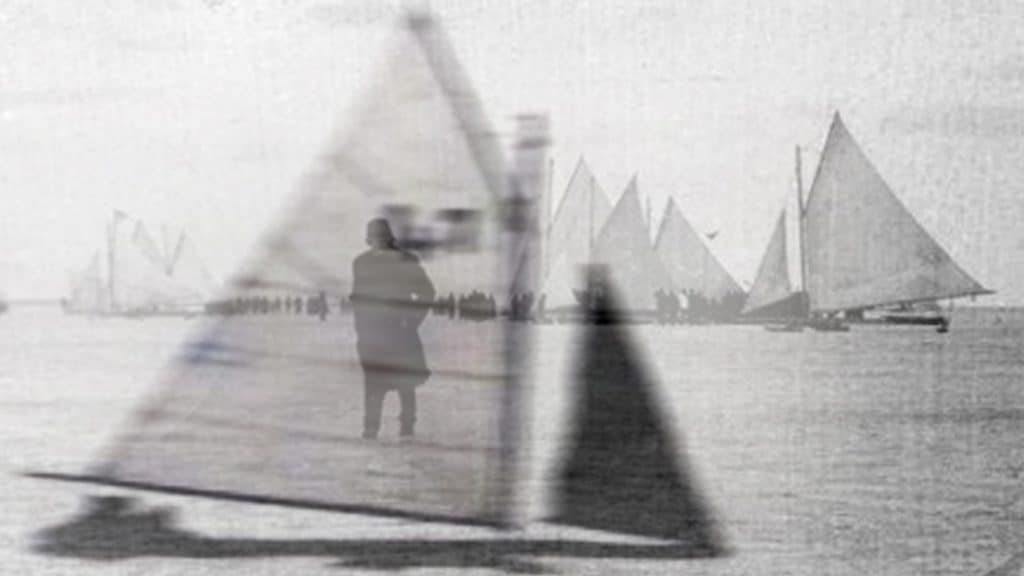 Pulling this one off the shelf again for a repost….
Today is Halloween which brings to mind iceboating’s favorite (and only) ghost story, “The Strange Tale of the Ice Soar“, by Greg Whitehorse. Make it part of your Halloween tradition!

Outside the windows of the South Side Ice Yacht Club, the Skeeters, Renegades and Nites were effortlessly gliding over the dark gray ice sheet. Suddenly, sailing into view came a chilling blast from the past. A huge stern-steerer, its yellow stained, canvas sails straining against the twenty mile per hour wind. Behind its sheer size, the Skeeters, Renegades and Nites disappeared for seconds at a time before appearing again on the other side.
Two, no three burly men steered and cranked and pulled, trying to tame the unruly beast. Moving in a southerly direction, its left (port? starboard?) runner gently lifts off the ice, a few feet at first, and then quickly shoots skyward. The runner plank is at an impossible angle to the ice. Surely the beast is going to capsize, but no, the three burly men continue to steer and crank and pull and the ice yacht slowly regains a more proper stance on the frozen surface. A slight change in direction to take advantage of a felt, but unseen wind shift, and the beast sailed away from view.