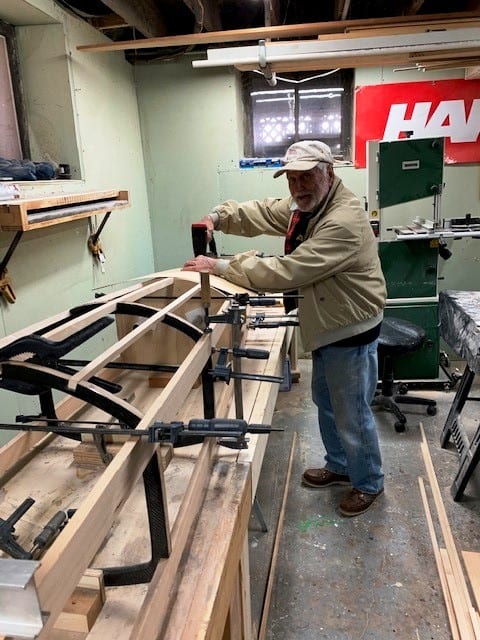 Previous: “Frosting For Frozen Fun”
When Your Plank Needs Work
A Weak Moment

Stopped by McCormick Lumber over my lunch hour Friday to pick up the one additional Sitka board I needed for the two 20 foot chines on the port side of the hull. I was greeted in the parking lot by the Global CEO of the conglomerate, Andy McCormick, who was returning from a high-powered business lunch. He was still sucking Diet Coke through the straw in the Hardee’s cup. I considered Andy a friend, but witnessing that he’s destroying our oceans still using straws, I may have to reconsider. He escorted me to the yard, probably concerned that I would slap as many boards as I could on top of the Swagger Wagon and tear off without paying. I asked him if he could close the overhead door as I searched for the fastest board, as I was a little cold. He asked me if I always wore my wife’s skirt on Fridays?

Saturday morning, thinking my neighbors probably wouldn’t appreciate the sweet howl of my planner in the driveway at 6:30 a.m., I made my way to my office to get the job done in our storage area. Since I don’t have a garage, I’ve sort of commandeered the space. It’s become an ice sailing junkyard; rather appropriate, as the room also harbors our building’s dumpsters. They don’t stink too bad(ly), and it’s a short throw for getting rid of the sawdust. Bonus. I’m probably supposed to put the $10-per-board-foot waste in a bag before depositing it in the non-recyclable dumpster, but we contract with a private service. They’ll pick up anything, unlike the City of Madison that will leave my carts stranded at the curb like a blind date with a nice personality, if they see one leaf poking out of the lid. With the first job of the day complete, back home for breakfast.

Next stop, Nordhaus Boatwerks. Arranged to meet up with Jim to compare different steering systems. After discussing pros and cons, I decided to go with a Renegade style system, but with a wheel (which is not allowed in the Renegade) and extra purchase achieved by attaching blocks to the steering post flanges and dead-ending the lines that go to the steering wheel sprocket back into a bulkhead. Maybe using Spectra rather than cable. I kinda sounds like I know what I’m talking about, right? Well, truth be told, before my remedial session with Professor Nordhaus, I was as clueless and a redneck in a woman’s studies class.
I was also rather uncertain about how I would ultimately attach the decking to the sideboards, so on my way back from church Sunday I gave Jerry Simon a call. It was 10:25 a.m. I was hoping he might be able to stop by my shop in the next week or so. He said, “I can be there by 11:00.” All Jerry needs is an app, and he could be like Uber. Before the eleventh bell faded, the doorbell chimed in and there he was in his well-worn sailing cap, jeans and work boot style shoes. Cheerful as always. I suspect Jerry is on Lombardi time—”if you’re on time, you’re late.” But he probably backed it off a bit for me, seeing as how it was Sunday, and all. And Palm Sunday, no less. Those services go on forever. No need to document with a watch. Every kid squirming in the pew is evidence enough. Of course Jerry didn’t come empty handed. He came bearing gifts of tools. A pneumatic staple gun in a plastic box with every component and staple size precisely labeled. He provided a detailed tutorial that would rival any YouTube sensation, and then showed me how I would put it to work for no-bubble decking and proper scarf joints.

My consultants weekend wouldn’t have been complete without a call to the Heppert Hot Line. All along I’ve thought it was a Call Center in Kingston, but I’m beginning to think the guy on the other end sounds more Minnesotan, than Jamaican. “How in the heck do I get a six foot level to touch three bulk heads on the sides of a curved boat,” I asked. “You don’t,” the guy said, “that’s only by the top rear spine. “Oh,” I replied sheepishly, thinking that maybe I had already sanded a little too much off the small section I had started with. Oh well, may have to shim out that one bulk head some to maintain the smooth curve. He went on to explain something about the flat spine transitioning into compound curves. “Ah…what,” I thought? But for the record, I never took any women’s studies classes.
(Photos below of steering in Meade restoration project at Nordhaus Boatwerks. My C-Skeeter steering will be similar).