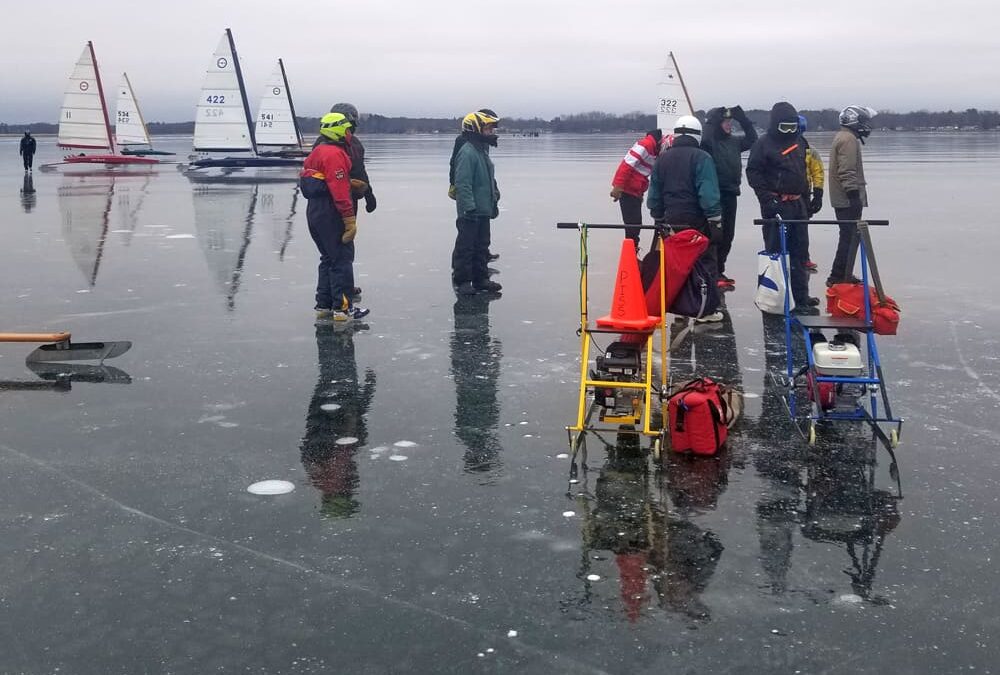 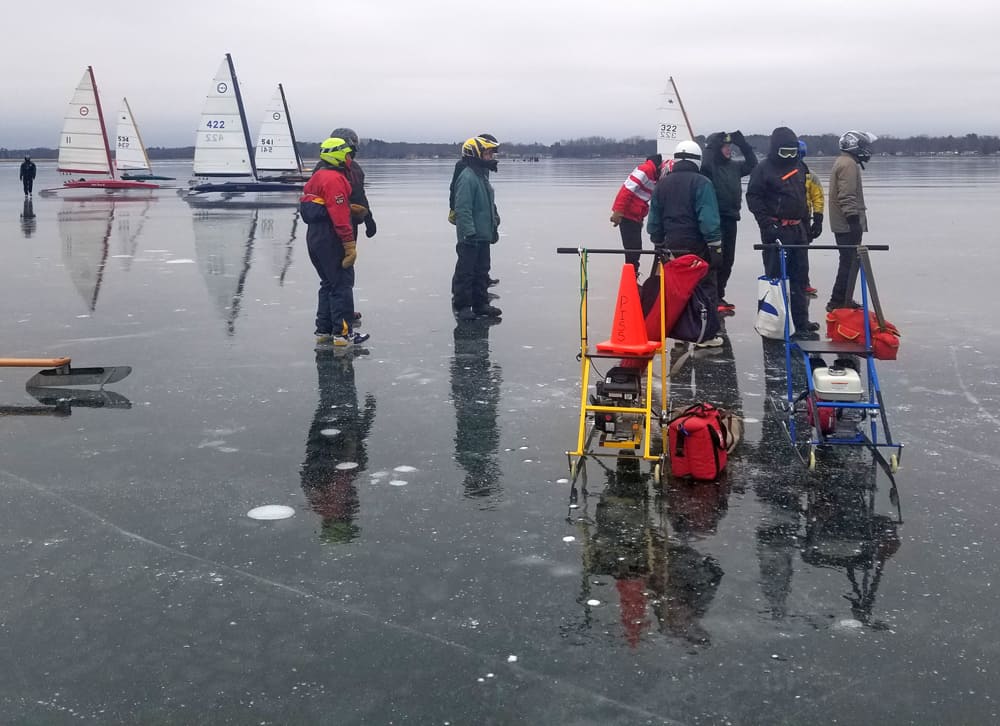 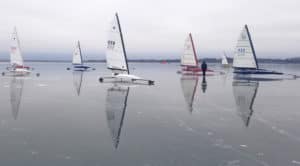 With a total of 19 boats over the weekend on ice that was as Hollywood as you can get, the Nites completed 13 races on Lake Puckaway in central Wisconsin, a great early season iceboating venue. The Nites competed for a Saturday, Sunday, and overall series.
The ice was so smooth you could not even hear your runners glide over the ice. These are the perfect conditions for ice boaters, hence the name “Hollywood Ice.”

With a large fleet in attendance, the competition was close. The 2020 Nite National champion, Chad Rechygl of Pewaukee Wisconsin, and Mike Jankowski of Green Lake Wisconsin battled it out throughout the weekend for the overall top spot. Split-scoring the event by days allowed sailors to try different settings and tactics. As they say, everybody has a favorite condition. Jim McCabe was the hot sailor of the weekend, cracking the top three on both days. Another local favorite, Byron Hill, also placed consistently in the top three. Chad Rechygl took first, Mike Jankowski second, and the Vandervelde brothers in the next two spots in the overall standings.

We were happy to see a strong showing of sailors from Lake Kegonsa and the Four Lakes Ice Yacht Club as well, with Lars, Henri, Brad, and Don in attendance. They sailed fast and showed a considerable step in improvement from last year’s event. We were also lucky to have Daniel Hearn join in the racing and experience the close roundings and the back and forth position changes that make Nite racing unique and fun. 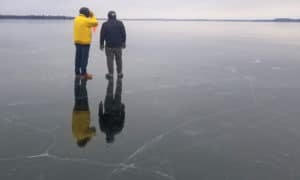 It was interesting to watch from the Race Committee view, learning from Deb Whitehorse, John Hayashi, and George Gerhardt. While Saturday’s course was more straightforward, the Race Committee had to chase the wind and change the track. When the wind settled in, the Nites sailed six races before the snow started to fly.

It was a memorable weekend of Nite racing. It was ICE COLD FUN!

What Made Milwaukee Famous

Can there be any better way to introduce the new Nite YouTube channel than by starting off with this Schlitz commercial that ran in 1979? Not only that, Nite Treasurer Maureen Bohleber collected the back story on the making of the commercial. Be sure to go over to the Nite YouTube page to read it all.

In 1979 the Schiltz Brewing Co. decided to make a series of commercials for the upcoming 1980 Winter Olympics featuring several sports that were winter related but definitely not in the mainstream of the official events. Iceboating turned out to be one of them. I’m not sure how they ended up with Nites and Pewaukee Lake but I’m guessing it had something to do with their corporate HQs being in Milwaukee at the time and Pewaukee Lake sailors’ reputation for enjoying their product. Kind of a win-win situation. Continue reading. 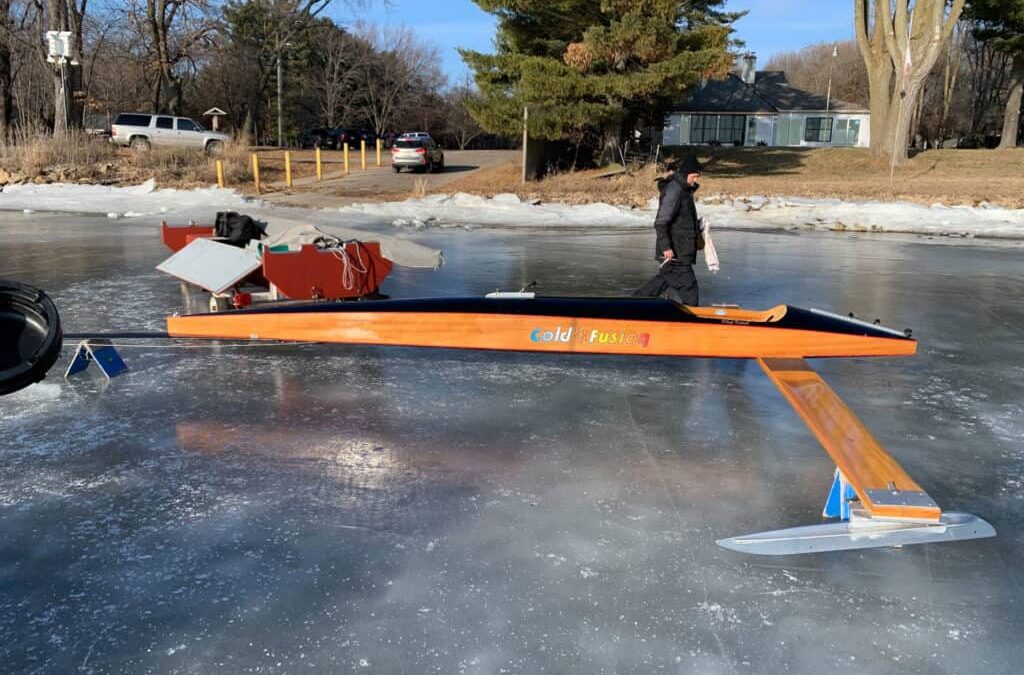 While we wait for ice, check out this slice of iceboat heaven from Doug Kolner who sailed his Renegade on Lake Puckaway yesterday (December 27, 2019). Doug, 4LIYC Nite sailors Lars Barber and Maureen Bohleber took advantage of Puckaway’s Hollywood ice before the rain and snow moves in today. 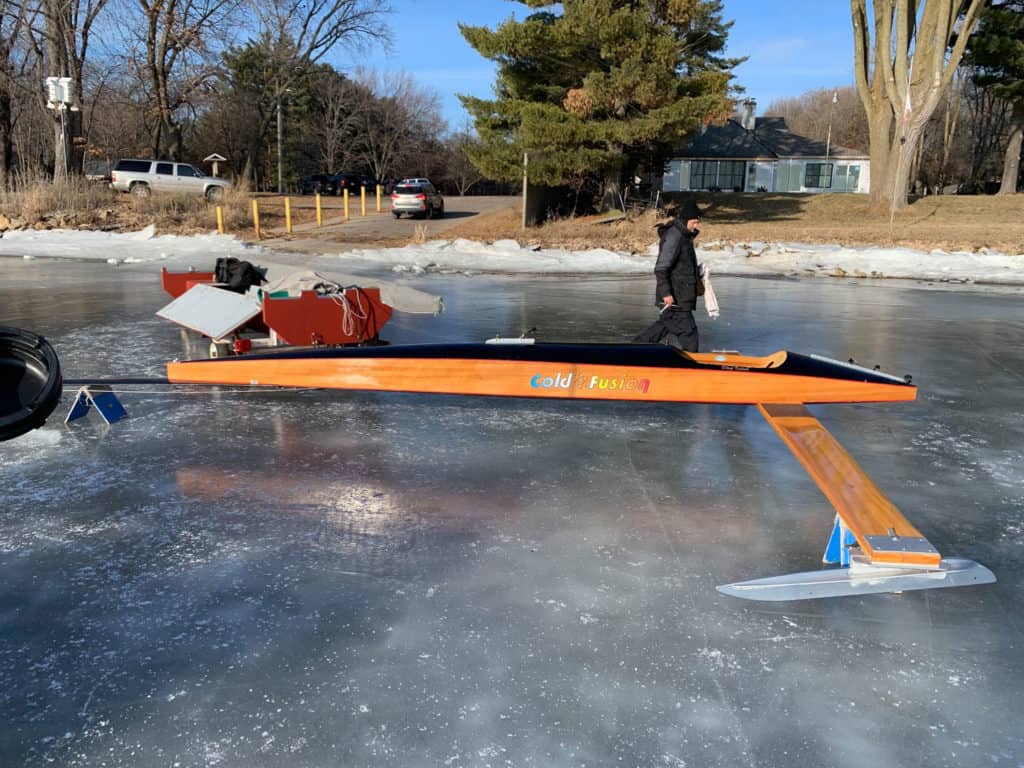 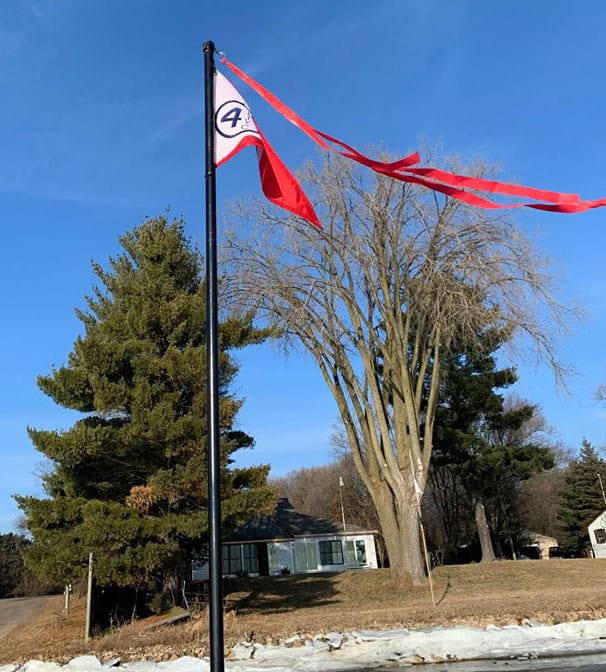 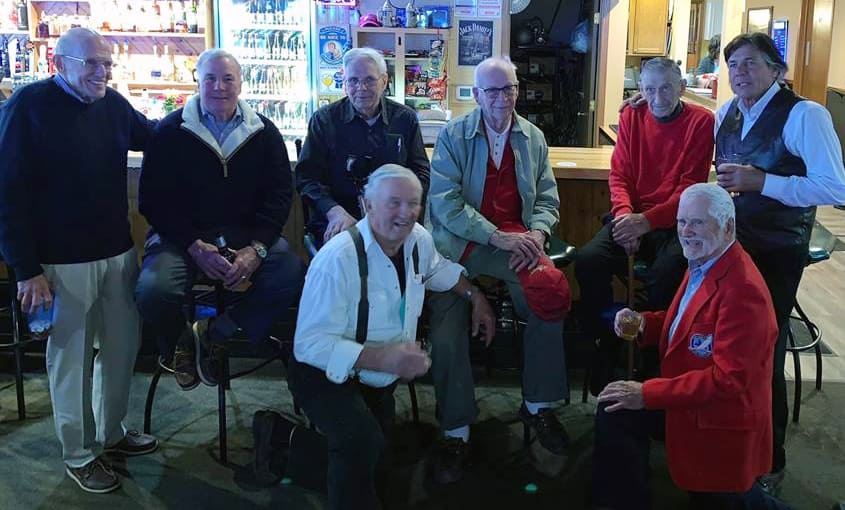 How fitting that a spring snow storm arrived the same day as our April 27th Four Lakes Ice Yacht Club annual awards dinner, a reminder of the cold weather necessary for ice sailing. Highlights include 4LIYC Commodore Don Anderson’s induction into the 4LIYC Hall of Fame, aka the Honor Roll; an all star line up of seasoned veterans (see photo above) and an acknowledgement of appreciation for Nite class outgoing Commodore, Don Sanford who wore the hat for ten years. All credit for the event goes to Trophy and Banquet Chair, Jori Lenon for bringing everyone together. Thanks to Greg McCormick and John Hayashi for the photos.