“How Would You Know?”

The subject of sailing on Lake Koshkonong, about 30 minutes south of Madison, came up recently on the 4LIYC Facebook page. Koshkonong looks inviting as you drive past. It was a reasonable question to ask, why not Koshkonong?

Well, 4LIYC members and other ice sailors just “know,” and here’s how:

C Skeeter sailor Pat Heppert remarked, ” When I lived in WI, I spent years driving by and checking it. So tempting many times when it looked like glass ‘from the road.’ But whenever you walk it, all sorts of WTF problems show up. I finally gave up and concluded Koshkonong is just not meant for iceboats. The root source of the problem is the highly variable water level, which causes all the subsequent problems.”

The definitive proof came from a Mattison-Krueger-Whitehorse adventure on Koshkonong back in the 1980s. 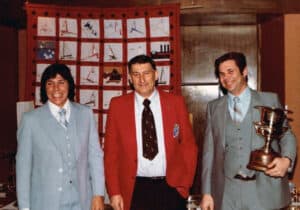 There was a big setup area. PK and I went tearing out to the lake. We saw spring bubbles to port and starboard. It was a gauntlet of spring water bubble-ups, like aerators. There were so many we could only turn around once we found a big area. As we sailed back to shore, we couldn’t follow our old runner tracks too closely because we had already busted through the ice on the way out. Bill Mattison said he was ready to push off and shook his head. ” I tried to tell you guys about this place, but you guys shamed me into it. “But How Would You Know”

We had a 24′ rake back mast, so we only needed 3 to set up the Skeeters. We considered ourselves so fortunate to get out of there that no one said a word about it as we went into the smoky tavern for a dipper.