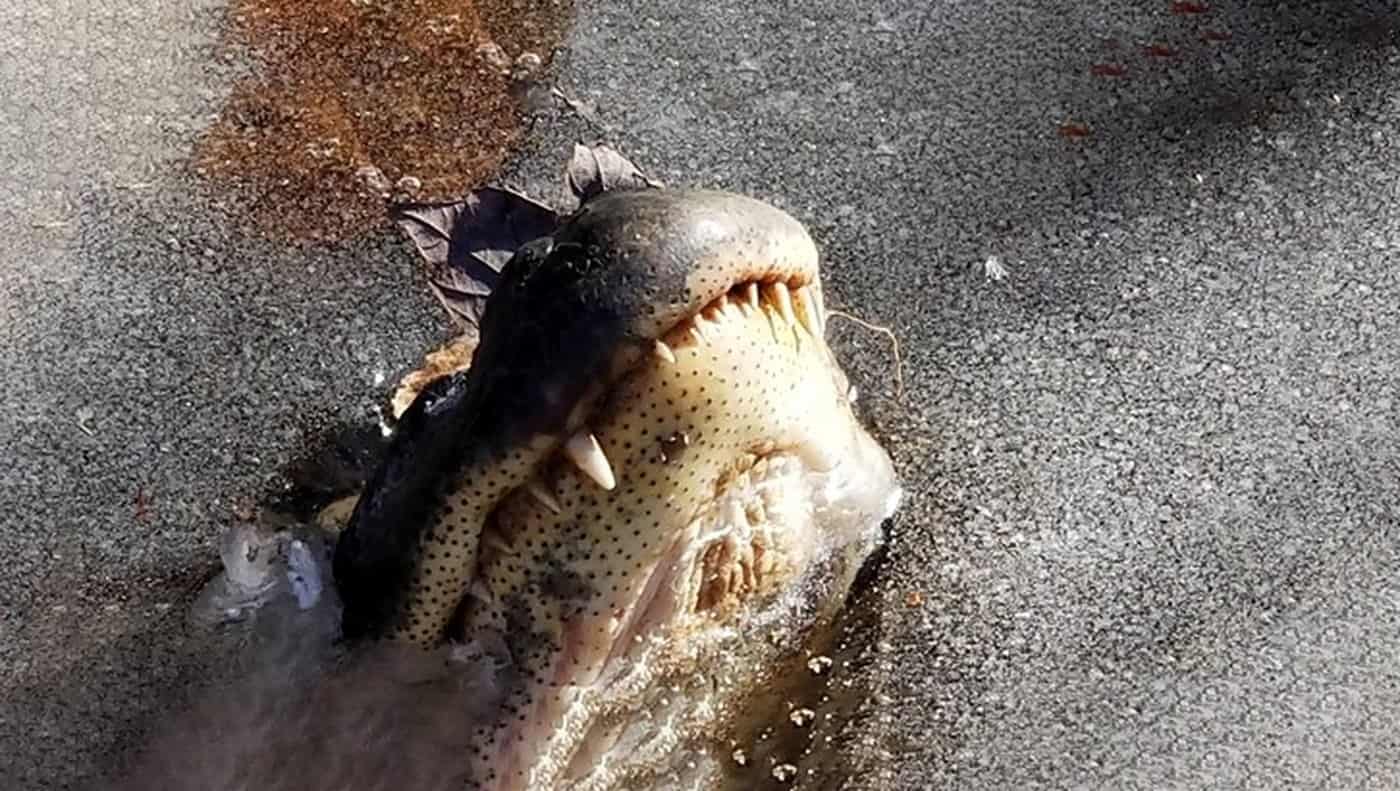 The state of the ice was discussed at last night’s 4LIYC meeting.  The Four Lakes area is not quite there yet but we should be ready for serious ice checks within days. Kegonsa was reported to be iced over but with the usual thin spots and goose holes. The east end of Lake Monona is iced over but like Kegonsa, there are open areas and thin spots all over the lake.

Lake Puckaway near Montello looks like the best ice in our area for weekend sailing. The Nite Class has called on an early bird regatta there for December 21-22, 2019.  Via their Facebook page:

Nite sailors we are going this weekend!

The Early Bird Regatta is a go. We have checked the ice this morning and it looks locked in and way thicker, the ice surface is also way smoother then over the weekend. We are looking at a thickness of about 6 1/4″ and growing so by the weekend we should be around 7 plus inches. We will not be charging for the event but we do ask that if you want to be scored and line up that you have your dues paid up. We will not be doing payments on the ice….sorry. We will also be running with the Renegades and they are joining us for the weekend to race as well.

The coming weather after Sunday looks to be unseasonably warm and now is our best shot before the real season kicks in January.

The regatta site launch site will be at the Marquette County boat launch (Apuckwaka). Due to the warming temps we will be starting early in the day so expect to have the flag drop at 9AM on Saturday. Be at the landing as that is where everything will take place. Please do not drive up or back up on the ice, do not take the landings out this early in the season.

Expect to do as many races as we can fit in. 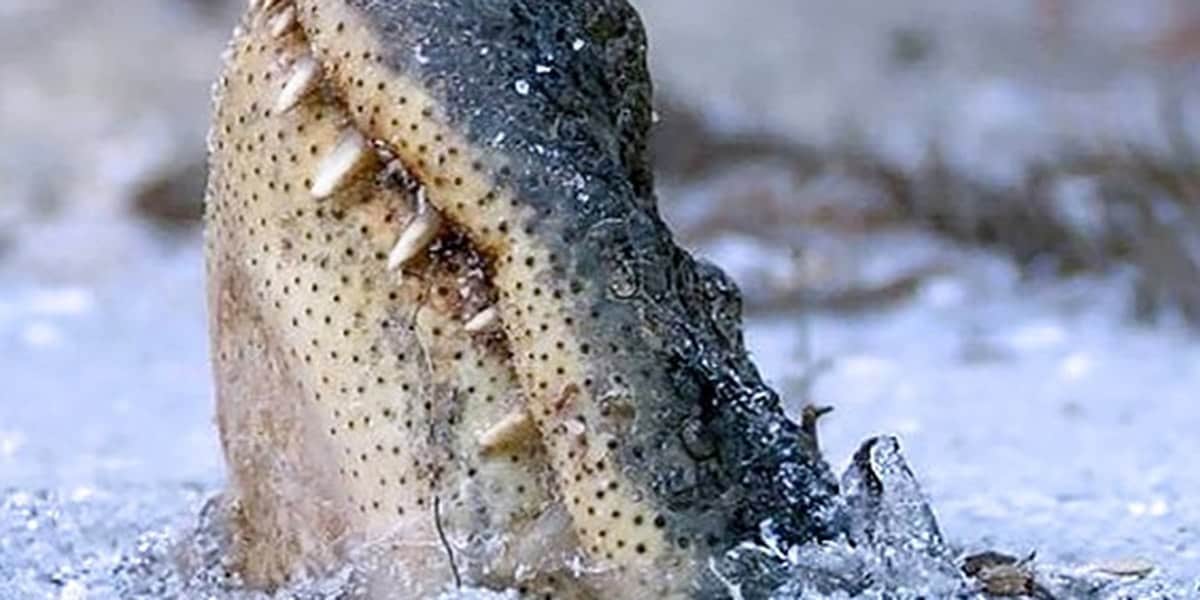 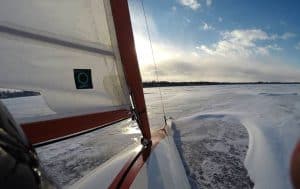 You Know It’s Cold When…

..It’s Too Cold to Iceboat!
We had planned on checking Lake Kegonsa ice conditions today, but wiser heads who want to keep warm are prevailing. The temperature of 1F at noon is keeping us off the lake.
Commodore Don Anderson will set up his Renegade there on Thursday when the temperatures will soar to 15F so we can get an idea of conditions.

GRAND SLAM FUN REGATTA & BLOODY MARY CLASSIC UPDATE: We’ll assess Lake Kegonsa and have the final decision about the Grand Slam posted on Friday, December 29th if not sooner. The Grand Slam is a fun two day regatta that is tentatively scheduled to take place December 30-31, 2017. 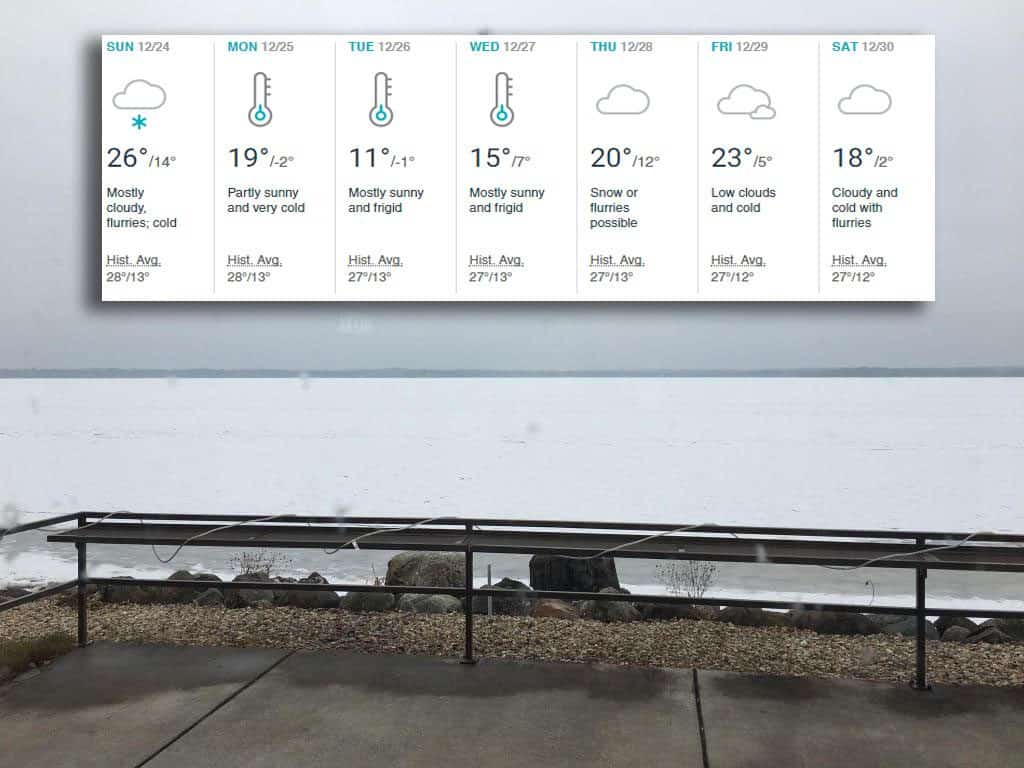 Today’s view of a still-unsafe Lake Kegonsa is much improved with this forecast graphic.

There will be no 4LIYC  racing for the weekend of December 23 – 24, 2017.
Ice checkers found only 3″ of ice on Lake Kegonsa and discovered a large goose hole near Colladay Point.
We strongly advise everyone to stay off of Lake Kegonsa because of thin ice and goose holes.

Now for the good news. Take a look at the Christmas gift of ice making weather coming our way. This is what dreams are made of for ice sailors. We will check Kegonsa’s ice on Tuesday December 26 and if it’s safe, plan on some fun scrub racing all during the Holiday week.

UPDATE: DNs ON WINGRA via Daniel Hearn: team maDisoN will be scrub racing once again this weekend on Lake Wingra in the heart of Madison. Ice remains in the same condition as last weekend, which was quite nice. Wind will be stiffer than previous weekend, this time out of the west, which is the opposite direction from last weekend (and a good direction for the shape of the lake). Forecast to be steady at 12-13 mph with gusts 16-17. Gusts easing off a bit as the afternoon progresses. Marks will be set and we’ll scrub race until we can’t pull anymore.

GRAND SLAM: Next update on our fun-regatta, the Grand Slam will be Friday, December 29. If there are conditions, we will hold the Grand Slam on December 30-31 and our annual Bloody Mary 10 lap race.