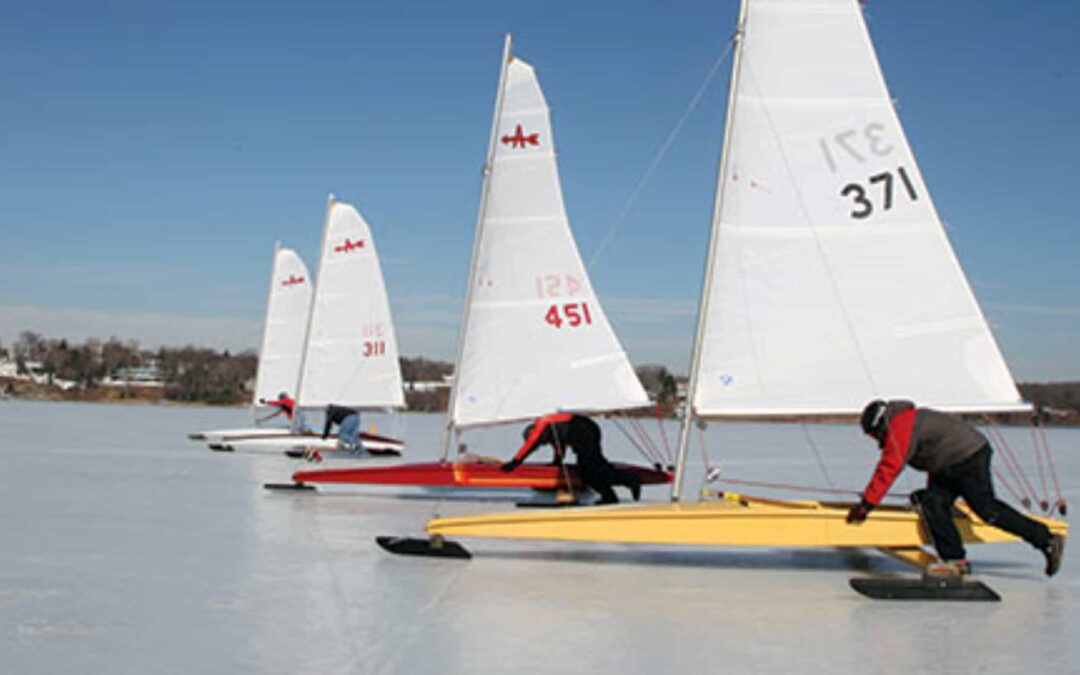 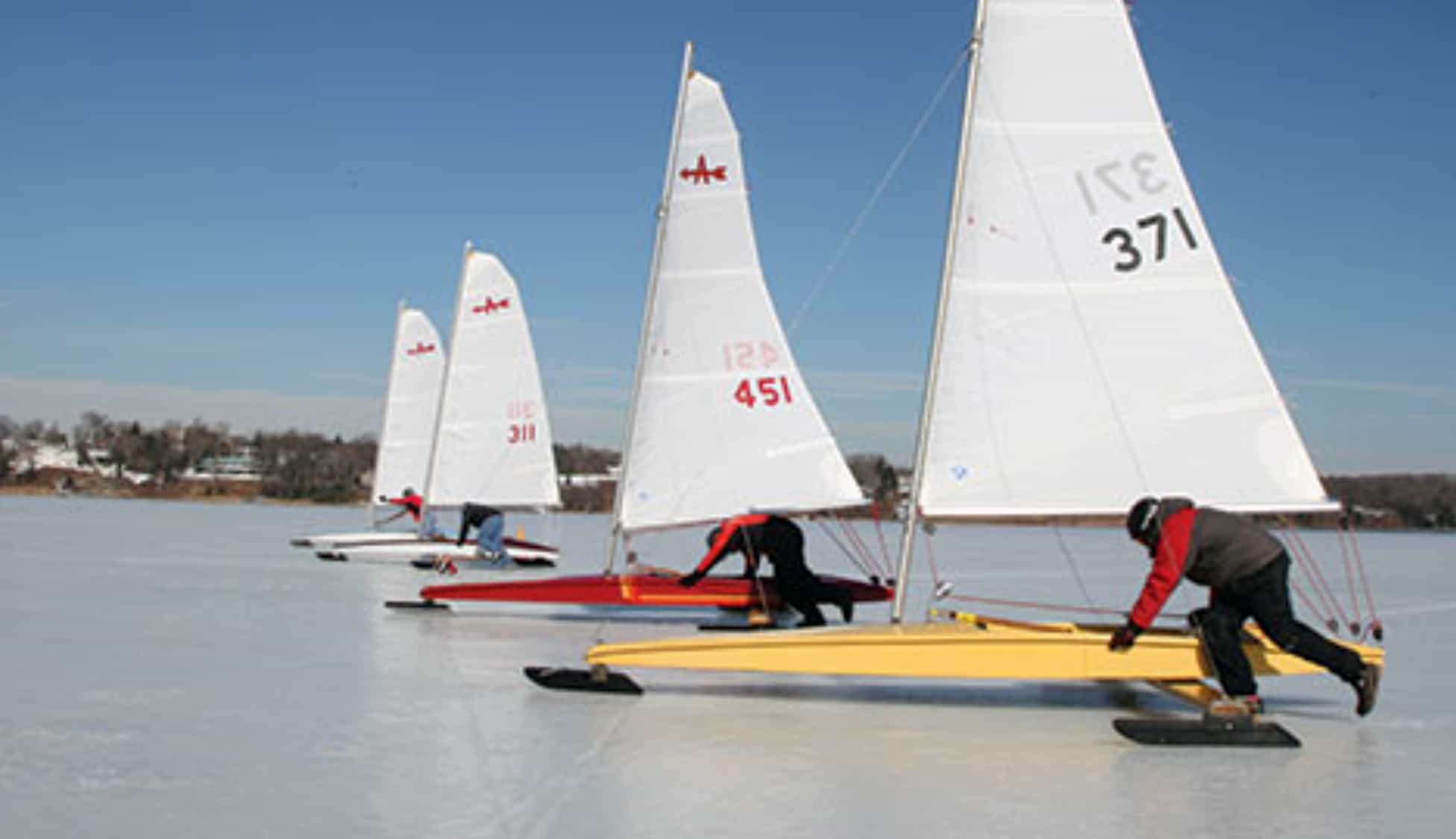 May 29, 2022 UPDATE: Long time friend of Prescott Shreeve, Tom Nichols, emailed with some of his memories. See text below.

The exhibition, Story Boats: The Tales They Tell, opens today at Connecticut’s Mystic Seaport Museum. One of the story boats is WHISTLING WIND, an Arrow iceboat owned by Herbert Prescott Shreeve. He was president of Lake Hopatcong Ice Yacht Club in New Jersey.

The Arrow iceboat holds its value (they sell rather quickly on the Buy & Sell page) and remains one of the most popular cruising boats, though east coast ice yacht clubs have racing fleets. The Boston family in Michigan developed the Arrow in their sail loft. Martha Boston Youstra recalls, “The Arrow, as I remember, was 16-feet with a 12-foot runner plank. The first boats were gel-coated by Judd Harrell and later sub-contracted to Custom Flex in Toledo, Ohio. Bill Sarns made the hardware, and we added the finishing touches at the loft. We had a trailer that held ten boats. The molds were sold to someone in Michigan’s thumb area and left to rot. [I’ve heard the molds are now in New Jersey. – Ed.] Originally they sold complete for $350. Some current boats have springboards added, and some now are selling for $5k. I believe Dad wanted a lighter-weight boat as he aged, yet with Lolly in mind. Her boat was called ICE TEA. Howard and his third daughter Sue won the first Arrow Nationals. I raced one time with Bill Mattison at the helm. That was awesome. I can’t remember how we placed. Unfortunately, I don’t remember the exact year, thinking 1964. I do have a couple of photos of our family fleet. Red Bank, N.J., had a large fleet, and Erie, PA, had a small fleet.”

I knew “Press” and his wife Madge very well. They always came together to sail. I don’t think I have ever seen a couple more devoted to each other. Press was active during the “Golden Age” of the Lake Hopatcong Ice Yacht Club. I believe he was one of the original founding members. He sailed a stern steerer for most of his ice boating career. He got into the Arrow when they realized the Stern Steerer was just too much for them handle. The Stern Steerer runners were just too much for Madge to carry.

He bought the arrow in the late 1960’s, I think. He was an excellent sailor on both hard and soft water. One year, the Arrow Nationals came to Lake Hopatcong. I do believe that Press beat Skip Boston in a couple of races. Jack Andreson from Greenwood Lake won the regatta. I think Press might have been third.

Press did not build the Arrow from a kit in his living room but that was the workshop for his ice boat parts. I am sure Madge never complained a bit. Press was a very competent and meticulous craftsman. His equipment was always in first class shape.

Press and Madge were very devoted to ice boating and almost always were on the ice wherever the club was sailing. I those days the club “traveled” together. DNs, Arrows, Yankees, Skeeters all showed up at the same lake. Press and Madge loved the sport and never looked for an excuse not to go sailing. They realized you had to be there when the ice was ready, not necessarily when you were ready.
Tom Nichols 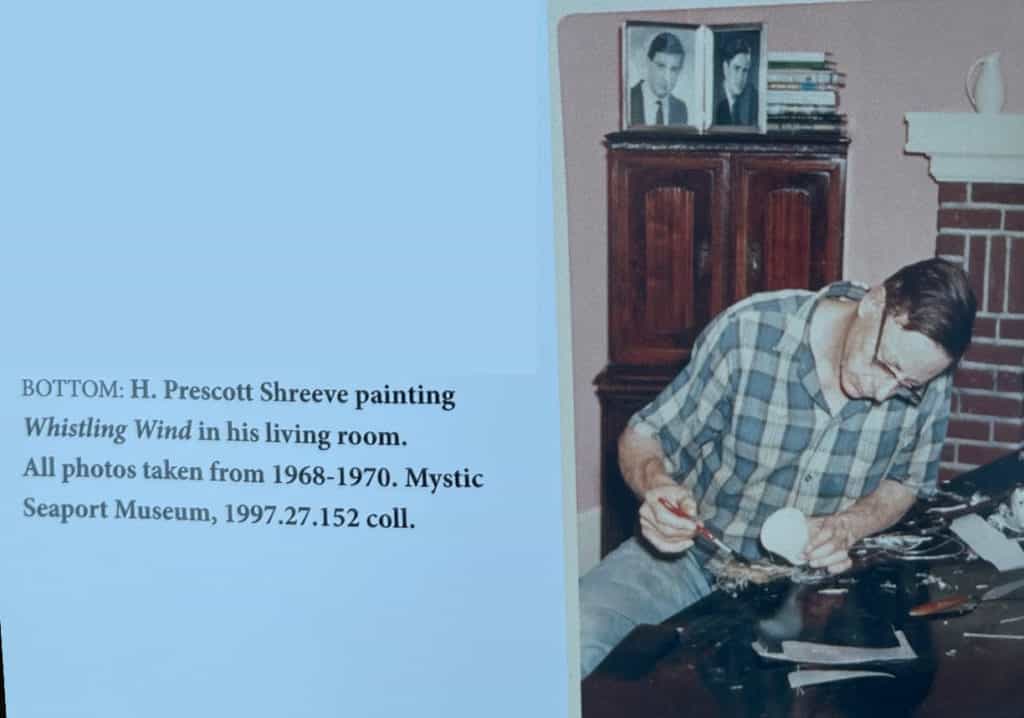 From the exhibition program. Courtesy of Mystic Seaport Museum. 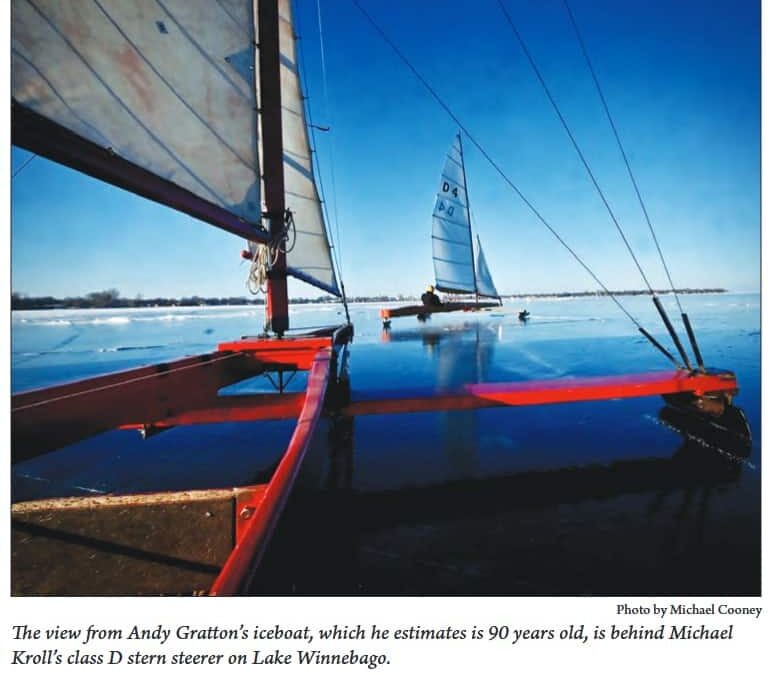 In The News: Gratton & Kroll Back in Action 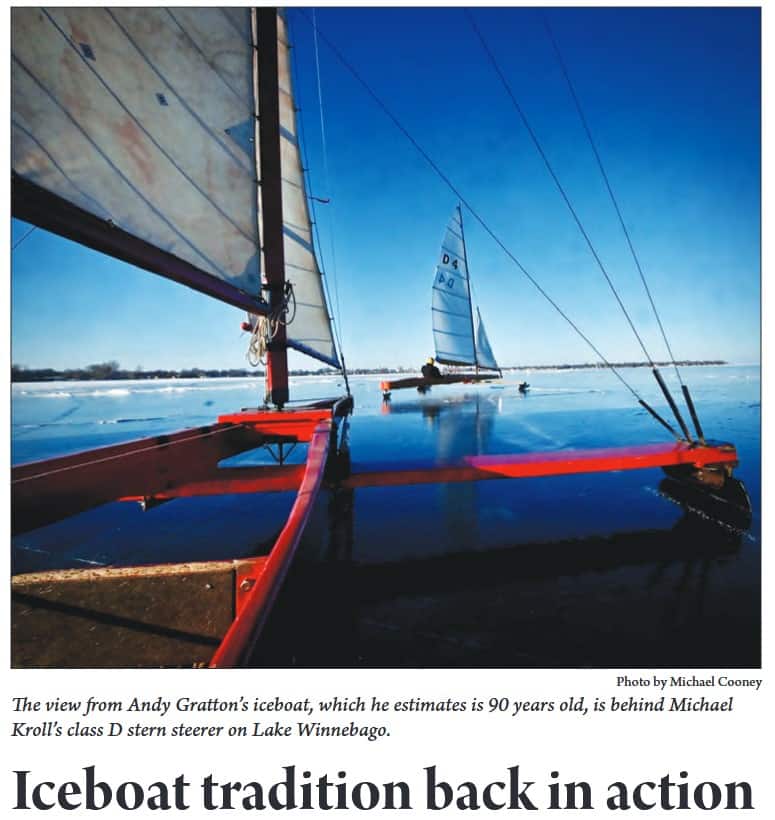 Via the Oshkosh, WI Herald

Andy Gratton and Michael Kroll were the first in the Oshkosh area to iceboat this year off south shore, launching from the Fugleberg Park landing recently. Both live nearby in Oshkosh so when any equipment breaks or needs replacement, it is a quick trip home for the needed parts.
Continue reading.