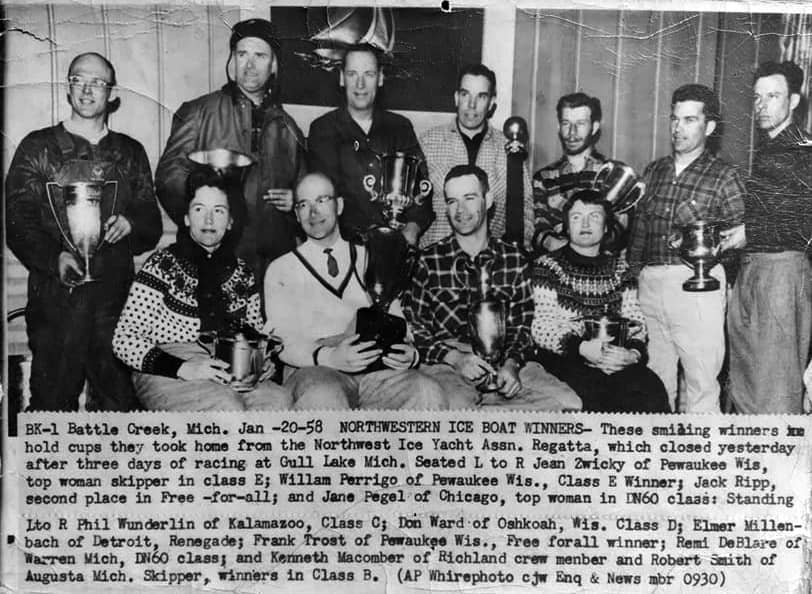 While we wait for Wednesday’s announcement about the 2022 Northwest Ice Yacht Association Regatta, this newspaper clipping posted by Chris Smith of Michigan on the Iceboating Facebook group, is a timely reminder of this historic regatta, first sailed in Menominee, Michigan in 1913. The video link below his comes by way of Shirley Cross Fortune, from her father, Detroit Ice Yacht Club’s Wally Cross. Jack Ripp is pictured next to Jane Pegel and represented the 4LIYC with his second place in the Free-For-All.
YOUTUBE VIDEO OF 1958 NORTHWEST REGATTA

REACH CLIMAX TODAY IN GULL LAKE ICE REGATTA
Elmer Millenbach of Detroit, favorite in the Renegade class, won his third and fourth straight heats Saturday to practically assure himself of a Northwest Assn crown. Gull Lake’s Bob Smith has a good lead in Class B over three Gull Lake foes and is a heavy favorite to sew up his division title today in his speedy “Alcoholic” after winning his fourth straight heat Saturday. Remi DeBlaer of Detroit has a substantial lead in the DN 60 class with three firsts and a second. C. H. (Skip) Boston of Detroit dropped out of contention after a first and two seconds when he disqualified himself in the fourth heat race. Weather continued perfect for the event with fast ice and a fine following wind for the fast boats — they reach speeds of 100 miles an hour or more — to cover the 1.3 mile racing course. There are several boats that dunked in a pressure crack near the island on Gull Lake Saturday and several relatively minor mishaps. One boat was badly damage, but none of the pilots were injured.

YACHTS SET FOR ANNUAL FREE-FOR-ALL
Final class Races to Open Program
Fate will play a big hand in determining at least two championships in the annual Northwest Ice Yacht Assn. regatta which winds up today at Gull Lake. Although the final heat race and the championship free-for-all race, matching the two top finishers in each heat race of the six divisions, still remain on the agenda, much of the doubt about class titles has vanished.
The heat race is at 10, the free for all about 1:30. The title contenders suffered boat failures Saturday in heat races to drop from title consideration.
Gull Lake’s Phil Wunderlin, after winning the first two heats of the Class C division handily, saw a broken plank in his boat force him from the third heat race and drop far behind his Gull Lake opponent, veteran Jim LaRose. And Jack Ripp, of Madison, WI, a prime contender in the featured Class E race, fell from title contention in that class when his boat sustained a spar failure in the fourth heat race.

DROPS SPAR
Ripp, who entered the fourth heat race in a deadlock with Bill Perrigo of Pewaukee, WI, thus falls far behind his Wisconsin foe, who has a first, two seconds and a third entering the final day of competition. While Ripp and Wunderlin suffered sad blows from Lady Luck, three other favorites kept up their amazing regatta showing. Don Ward of Oshkosh, WI, who has won 10 straight Class D titles, stretched his heat victory string in the current regatta to four Saturday to take an ample edge of Gerry Sciott and Jack Smith of Gull Lake.

DIRECTOR OF ICE YACHT REGATTA DRAWS PRAISE (Notes on winter classic)
Busiest man at the Northwest Ice Yacht assn regatta at Gull Lake this weekend is genial Gerry Scott, Commodore of the Northwest Assn. Under Scott’s supervision the regatta has been run off in fine style, drawing praise from more than 90 entries from four Midwestern states.
But Scott probably would enjoy this year’s regatta more if he were able to compete himself.
Because of arthritis, Scott has been sideline from actual competition in this year’s regatta and has been forced to watch Jack Smith pilot his “Hiki-No” in a great battle for Class D division honors. Scott hopes to be back at the helm of “Hiki-No” in next year’s Northwest Assn. regatta.
Other notes from the regatta:
Next year Northwest Assn. regatta has been awarded to Oshkosh, WI…Chris Smith of Holland, an executive for Chris-Craft Co, commuted from Gull Lake to his office daily by plane, taking off and landing on the slick ice surfaces of the lake…
There’s a three-generation entry in this year’s regatta. Robert and Jean Zwicky of Pewaukee, WI, are entered individually in the E Class, while sons Henry and Bob are individual entries in the DN 60s. Kick Kidney, father of Mrs. Zwicky, serves as mechanic for the family ice yachts. He’s a former competitor….
Dave Rosten of Madison, WI lost his yacht “Trump” when it shattered after a collision with Chris Smith of Holland….A new point scoring system was approved by Northwest Assn. members at the annual business meeting. It awards first place finishers in each heat 1000 points, second place 910 points, third 834 and down the list comparatively.
The weather continued perfect at the regatta and many competitors found it hard to remember when the regatta was held on the first weekend scheduled in many years…Scott disclaims any credit for the conditions….Conrad Miller, Vice Commodore of local and Northwest units, was able to race in the regatta, but was out of contention entering the final day….His son, Mason, was another local entry….There were plenty of spectators on hand for Saturday’s races. The Gull Lake shoreline was dotted with fans and amateur photographers… The regatta attracted nationwide interest. It was covered by newspapers from most Midwestern cities plus at least one national magazine (Time) as ice yachting made its biggest hit here….The regatta probably won’t return to Gull Lake for at least five years. .