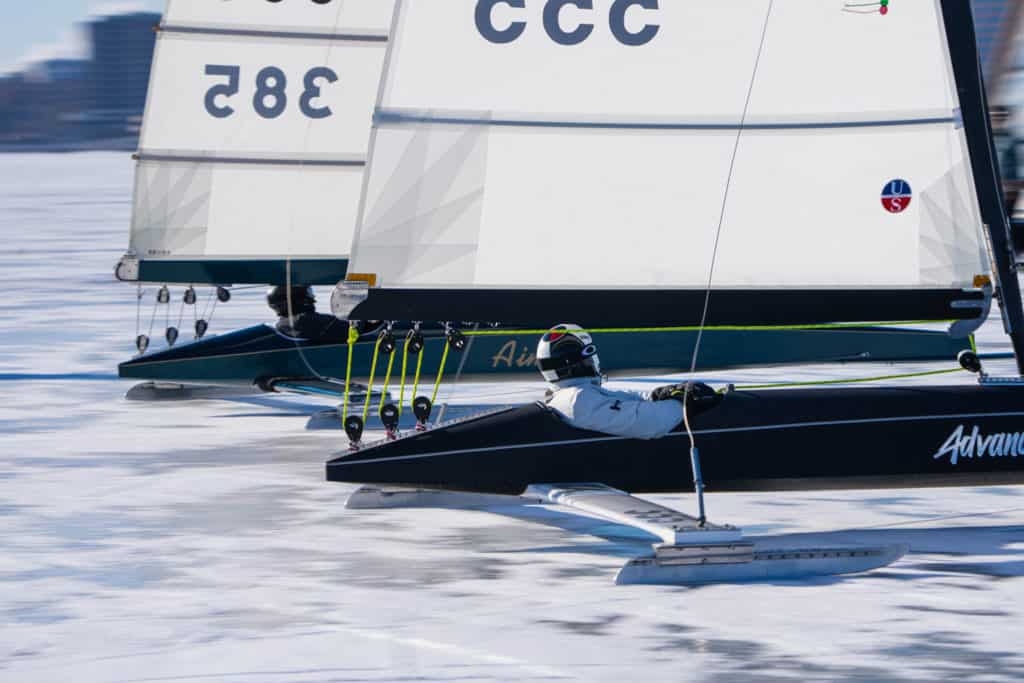 What a fun weekend in Madison Feb 18-20. The collection of iceboating enthusiasts really encompassed the spectrum of abilities, which makes the experience so fun. The way folks light up when they have first ride…and the hardened veterans that tweak their set ups.

The Renegade Class has been around since 1947 (75 years!). Through the years, the boat has stayed true to its One-Design roots and has produced some of the best iceboaters the sport has seen. This year’s championship fielded a talented group, which included 5 past class champions.

I’m new to the class, but not new to iceboating. I’m a generational sailor from Toledo, Ohio where Renegade sailing was quite popular when I was growing up. My father, Denny Dieball, sailed #76 through the 70s and 80s.

My brother and I cut our teeth in the local DN fleet as we grew up. As life moved on, I became a professional sailor and spent the winter months in Florida from regatta to regatta. Iceboating was just a fill in. In the early 2010s, I got serious about DN sailing and worked with my friend Ron Sherry to get geared up and competitive. I loved it and was hooked again, but I always had great offers for soft water sailing in Florida, so it wasn’t until this past summer that I told myself I needed to sail and have fun on my own and iceboating fit the work schedule nicely.

With the help of Deb Whitehorse and Daniel Hearn, I got in touch with Don Anderson and purchased a Renegade and took it back to Chicago and started rehabbing. Just like so many fleets in both hard and soft water sailing, it is truly the PEOPLE that make the experiences special. These folks helped me get set up with a boat and offered any advice that I had a question for.

I had some unscheduled quarantine time, so I dug into the boat and before long was applying new paint and working to make sure it would be ready for the maiden voyage…which would be later in January in the 4LIYC club races.

My first few races I could tell that the “One-Design” aspect of the Renegade would really appeal to me. The racing was close and speeds so similar. I love that and having only the equipment with the boat, it made focusing on sailing a lot easier for me. No lugging runners and sails to the starting box, etc.

This year’s Championship was what seems typical of multi-day iceboating events. The weather not fully cooperating, our Friday and Sunday skunked with BIG winds. I didn’t mind as it allowed me to get to know more folks that I hadn’t previously met. The Renegade class members are a great group and everyone has a great passion for the boat, history and tradition. Saturday’s provided plenty of variety to make up for the down time.

Before getting into some of the racing details, hat’s off to the Race Committee. The wind was predicted to shift all day and it did! They did their best to race all classes in the best breeze available and did an incredible job getting three races per division to ensure the minimum number of races were met to call a regatta. Great job!

The first race was in a dying breeze. In fact, at the start, it was difficult to get the boats rolling. For me, I was lucky enough to catch a small zephyr and get the momentum going. I was able to keep it going to the top mark and only a few from the other side crossed. Not having raced a Renegade in this light of wind, I was happy to get round the 1st mark. With the voice of Ron Sherry in my head, I focused on “don’t worry about the angles, just keep the boat going”. It was all I could do to focus on that and not lose my mind when I saw someone catching that next puff. There were boats moving, boats stopped and I really lost track of where I was with the leaders and those that were right behind. I felt fortunate to keep the boat going as nearly everyone at some point stopped. I finished right behind past champ Tim McCormick for a 2nd. Many fell behind and others had pushed back to the pits, resulting in DNFs. Tough opening race, but the breeze was shifting and increasing so there was hope.

I’m sure optimism was low with the entire group of sailors, but the wind did fill in. By the time the Renegades were up for a race, it was over 10 knots. This made for a great race. Super fast and competitive. For me, I came off the 2 starting position and had a great start to lead the fleet from the left. We all had a little something the right didn’t have and our side looked great and I was leading (!!!). I had that Ron Sherry voice in my head again (I know that’s dangerous LOL) saying “just go fast Skip…keep the pedal pressed”. I was so happy to have opened up a huge lead…you know one of those leads you never lose. Unless you are a newbie and get soft in the upper right corner and watch the fleet get wound inside! UGH! I managed to fend off Jim Gluek at the top mark, but he proved why he was the reigning 2-time champ by putting me in his dust to win the race. Mentally, it could have been a downer for me, but I was just psyched to be in the top and happy to get another 2nd.

Our last race was in some bigger winds, maybe gusting 13-15. Again starting in the 2 position, I had a good start, but had to tack under Don Anderson who was smokin’ from the left edge. Again our group crossing on port had a little special puff and crossed the group from the right. What tight racing. Don, myself and Mike Derusha were nearly three wide at the top and flying downwind. All three of us were jockeying for position at the bottom with Don edging myself and Mike right behind. I was able to point a little higher than Don and get inside of him to take the lead. I got around the top in good shape and sent it downwind again. Last beat, I had a nice lead. Nothing could go wrong, right??? How about déjà vu? Mike gets wicked up inside of me as I go soft on the right again. NOT AGAIN! Like the previous race with Jim, I was able to hold off Mike at the top, but it was a true dual on the run. Mike split with me to have starboard advantage at the bottom, but I caught a nice puff and finished for the win. With 2,2,1, I was ecstatic. What a great opening to the event. My goal of top 5 was looking quite good.

After the long day, it was fun to rehash the excitement back at the launch. I really appreciated all the kind words and truly was having a great time learning, talking, meeting folks in the class.

The forecast for Sunday was big winds. Bigger than Friday’s abandonment, so it would have been easy to play the odds and finishing counting scores, but I kept focus and took the runners back to the hotel get to get the edges sharp and focus on the next day. As luck would have it for me, the winds were too much for sailing and the regatta was called off. I’ve been on both sides of this one. Sitting 2nd and dying to go, but being in the lead “at the cocktail party” is never a bad plan if you can do it. 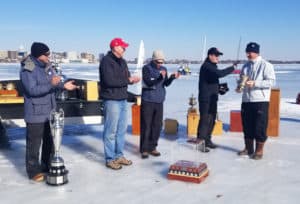 You know, the racing seems to be the “story” of an event, but let me tell you about the people in the Renegade Class. So many are so generous with their time and volunteerism. It keeps it going. And for those that embraced the newbie….Don Anderson for a wonderful introduction to “Renegading”, the McCormicks for showing me the fun side of Madison, Mike Derusha and Jim LaFortune for the talks at the hotel. What a great collection of personalities.

Special thanks to those that helped me get organized and fast. Deb and Daniel continued to help as leaders of the 4LIYC and involvement me as a newbie. Ron Rosten became a friend right away as he helped me get my runners tuned up. He’s so generous with his time…I can’t thank him enough. Ron Sherry for the tips and encouragement. Mike Boston for his tips and encouragement (and really fast sail, by the way!). Ken Sabin who always helps and lends perspective. It’s been great and I can’t wait for the next one!

Photos by Will Johnston. See all of Will’s Renegade photos at this link.