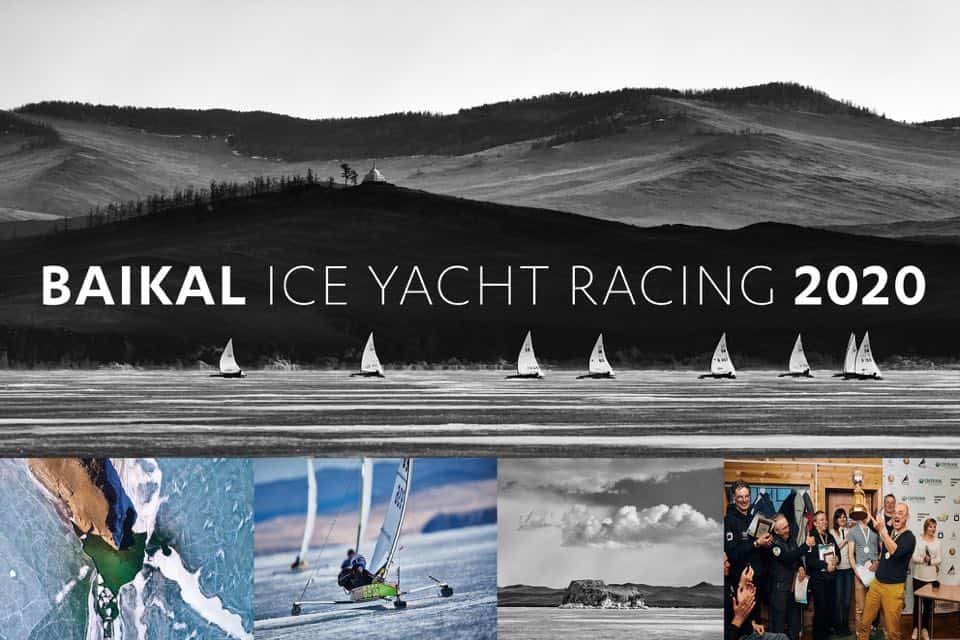 Ice sailors, in March 2020 you have an opportunity to take the trip of a lifetime. Sailing on the largest freshwater lake in the world in one of the most remote areas of the planet is an adventure you’ll never forget. Below, German DN sailor Jörg Bohn G-737 shares his love story to Baikal.
Baikal: What To Know for 2020

Have your ever considered going to Lake Baikal?
Here is why it’s worth the trip!

The Baikal Short “Love“ Story!
Since 2012 I’ve traveled every year to Siberia and the Far East to go ice sailing.
In 2012, I heard about the Lake Baikal event from British ice sailor, Chris Williams K-1.
The logistics of getting our iceboats to Siberia were solved that first time with help of our Russian ice sailing friends in Moscow and the Trans Siberian Railway. We flew to Irkutsk from Europe through Moscow. We arrived in Irkutsk early Friday morning, one day ahead the event.
A minibus was waiting for us at the airport, thanks to our hosts, and took us straight to the sailing area called “Little Sea“ (Sarma), opposite of Olchon Island, to a place called Uyota. Even though, I was tired it wasn’t possible to fall asleep on that five hour ride. I had never before in my life seen such a wide open beautiful mountain landscape. Thousands of cattle and horses were scattered on both sides of the road and sometimes right in front us. Half way into our trip we stopped for a delicious meal at a roadside restaurant made by the indigenous Burjatien people.
The paved road turned to gravel when Lake Baikal appeared in the distance. Forty five minutes later we arrived at a picturesque lodge nestled next to he lake. The shipping container with our iceboats arrived at the same moment.
Our group was warmly welcomed by Galina, the lodge owner. Hotel rooms or cabins, both with separate bathrooms were our choice for a very reasonable price. Food was ready right after check-in. One of the specialities at Uyota is Sagodai, a marinated Omul sashimi topped with onions and pepper. Omul is the most famous and common fish of Lake Baikal. Of course many dishes of traditional meat and salads were served as well. Later when were on the ice sailing our boats, we were delighted when Galia and her staff delivered a courtesy lunch right out on the starting line.
13 hours of daylight and comfortable temperatures around freezing on sunny days are the standard. The breeze varies between mostly light to medium and sometimes a bit more, especially in the mornings when there can be sudden gusts before the wind around noon. The ice is hard and the thickness between 1 and 2 meters. The bay we sail on measures 5 x 40 miles. The lake itself is about 50 x 400 miles of size and 1 mile deep. It measures 25% percent of the world’s freshwater. Lake Baikal is 23 million years, the oldest lake on our planet (the second oldest is 2.5 million years old).
You can feel a special energy from the lake that makes this place unique, even magical. It’s probably one of the reasons, aside from the unbelievable Russian hospitality, that got me hooked. There’s so much more to discover, for instance, holy springs and landmarks revered by the indigenous people, , fresh water seals, and caves with ancient paintings.
The launching and sailing area is easily accessible, right in front of the lodge, an easy 5 minute walk or you can hop aboard the free on-demand shuttle bus which runs all day long.
The race committee gives plenty of notice when to leave the pits towards the race course. As mentioned earlier, the wind takes some time to settle into it’s direction. Therefore, racing doesn’t normally begin before noon which makes for a relaxing morning. There are three regattas scheduled during the 8 day regatta week. One day is an off-day to allow for exploring the area by Hovercraft, Russian off-road vehicle, helicopter, or hiking. The regattas are the Asia Cup, the Russian Championship and the Baikal Cup. There’s lots of great sailing and probably the most boat time you’ll get all season! Since 2012 we have been able to sail every single day! Depending on the number of DN sailors we mostly sail in two fleets. The Ice Optis are also a racing that week.
Ice sailing is social and in the lodge, there are special evenings with Asian, Russian and European dinner parties. Live music is often played spontaneously. The number of participants from Europe and the US have grown from 4 to over 40 DN Sailors. Logistics are challenging but well worth the effort. Truck transportation takes more than 8 weeks on the road: from Moscow to Germany to pick up our containers, then to Lake Baikal, staying there during the event, and again to Germany and finally back to Moscow, including a whole week at customs. The containers have built-in racks for safe equipment travel and to get 21 boats in each.
The number of sailors going to Lake Baikal is growing constantly. The reason is simple. Even though, initially everybody plans the Baikal journey as a once in a lifetime trip, they all return “Going East“, year after year.
See you on the ice! JörG-737
If you are interested, the next event is scheduled March 14th until March 21st!
Check the leaflet “What to know“ for further information!,
or look at www.baikaliceyachtracing.eu
Special note for those planning a trip from North America:
Those of you, time permitting, might have the chance to combine two, three or more events in Europe with Lake Baikal. You can fly in to Germany on Lufthansa and ship your boats along as windsurfing equipment , departing from Chicago, Detroit or Boston. You can travel to the Worlds 2020 with G-737 and then leave your boat with G-737 for Baikal. G-737 will put your boats in the Baikal container. Boats could be stored at G-737 after Baikal and be used again e.g. for the Eastern Challenge in Finland in November or even the Europeans before taking them home to the Worlds in the US. Of course, you could leave a boat here like many US sailors do for future events too. Contact G-737 for details.