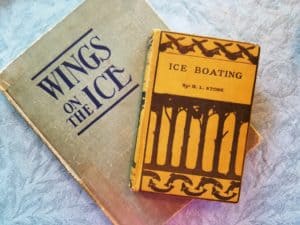 “The design, construction, and handling of an ice boat is an art rather than an exact science.” Herbert L. Stone

Yachting Magazine editor Herbert L Stone, editor of the first ice sailing book in the United States, is being inducted into the National Sailing Hall of Fame. Stone edited the book “Ice Boating” in 1913 and also wrote the forward to “Wings On the Ice” (published in 1938), one of the best books on the subject ever written.

I can find no evidence that Stone ever owned an iceboat but he had a tremendous influence on the sport by helping to popularizing it through articles in Yachting Magazine. Stone played a big part in reviving the Ice Yacht Challenge Pennant (IYCP) when he encouraged the IYCP trustees of the New Hamburgh Ice Yacht Club to pass on the trusteeship to the Eastern Ice Yachting Association.
Read Ray Ruge’s 1950 article about the revival of the IYCP published in Yachting World here.

Perhaps one of the chief charms of ice boating is the fact that the implements with which the sport is played, just as in the case of sailing yachts, have not been reduced to a fixed, static quantity. The design, construction, and handling of an ice boat is an art rather than an exact science. There is still room for the play of new ideas, for the expression of individual talent, for the exercise of skill, knowledge, and ingenuity.
Herbert L. Stone
Excerpt of forward to Winds on The Ice, Frederic M. Gardiner

Other ice sailors who have been inducted into the NSHOF are: Peter Barrett, Bill Bentsen,Jan Gougeon, Meade Gougeon, Olaf Harken, Peter Harken, and Buddy Melges