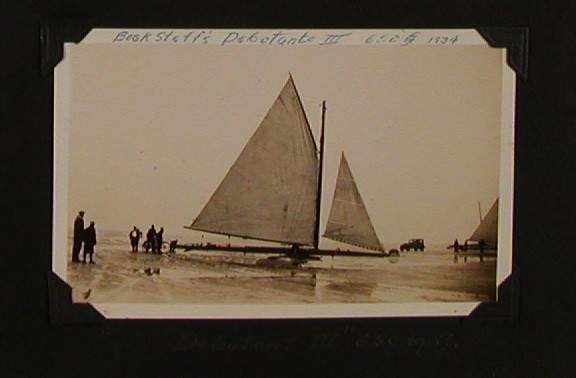 Ice yachtsmen of the midwest united in 1913 to organize the Northwest regatta to determine which club had the fastest stern-steerers. Read more about their efforts and the first Northwest which was sailed in Menominee, Michigan.

Two years later, the Northwest regatta came to Madison for the first time and was sailed on Lake Monona. The Milwaukee boat DEBUTANTE III won the A class, beating local hero Emil Fauerbach’s PRINCESS III. Madison’s most famous iceboat builder of the time, William Bernard, won the B fleet. Interesting to note that there was a C class champion back then but the C class NIYA records that I have start in 1926.
Madison historian, Frank Custer, wrote an absolutely fascinating story about this regatta filled with the kinds of details that iceboaters love to read, like the fact that the DEBUTANTE III was the first boat to use aluminum runners. Custer’s article is a must read, check it out here.

FREE FOR ALL TO DEBUTANTE III
Milwaukee Owned Ice Yacht Wins SQUARE PEOPLE’S Cup On Lake Monona
The free-for-all race for the Square People’s trophy for ice boats of all classes, which is always a feature of the Northwestern Ice Yachting association regatta was won this morning by DEBUTANTE III, skippered by its owner, Douglas Van Dyke of Milwaukee. The race went 15 miles and the beautiful Van Dyke craft covered the distance in 59 minutes and 5 seconds. Considering the light breeze and the snow, this is considered fair time.

DEBUTANTE II, the sister boat of the winner, struck a stake and was disqualified. FLIT, FREAK, and VALIANT withdrew.

The final races for trophies in the B and C classes were run off late this afternoon.