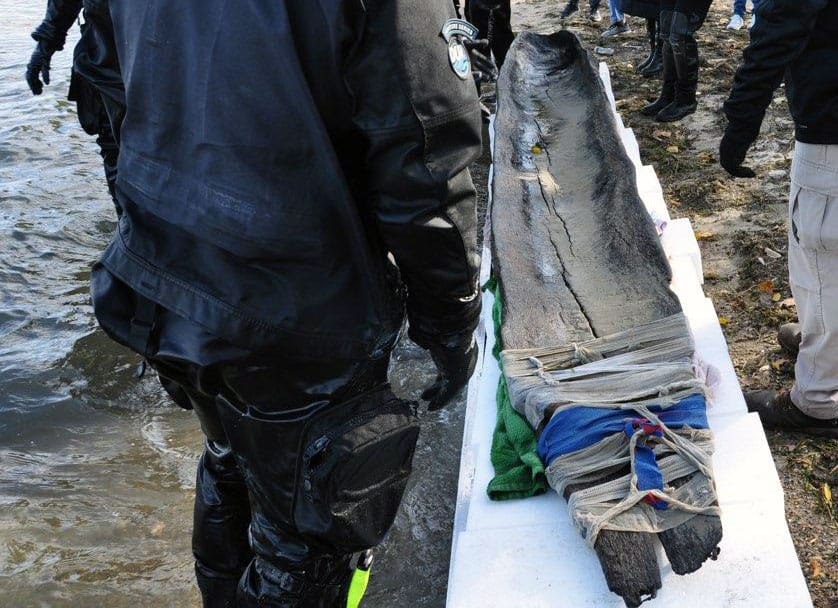 Dejope (Four Lakes) is the territory of the Ho-Chunk Nation, the indigenous people who always have and continue to live here. The Whitehorses are Ho-Chunk Nation tribal members and long-time Four Lakes Ice Yacht Club members, including my late husband, Harry Whitehorse. I’ve always thought Native people had the technology to make iceboats. Harry told me that his uncle George Seymour built traditional snow sleds using deer antlers for the runners. Indigenous people could have made an iceboat using deer antlers for insert runners, woven rush mats for a sail, and a dugout canoe for the hull.

Yesterday, November 2, 2021, archeologists carefully removed an ancient dugout canoe from the bottom of Lake Mendota, where it had been resting for 1200 years. Looking closely, one could imagine a mast step and a steering chock hole.

Via Tom Kneubuehl posted on the Historic Madison, WI Photo Facebook page:
“This dugout canoe was pulled out of Lake Mendota around 1:00 p.m. today. It could be the oldest known sunken boat/shipwreck in Wisconsin. It is about 1200 years old and was discovered by a diver in June when it happened to catch their attention. Apparently the diver contacted the State Historical Society and a chain of events happened which led to today. A cache of fishing weights were found in the canoe so apparently it was used by the inhabitants of that time to fish with weighted net. Note how small the canoe looks. They must have had great balance and were obviously smaller. The canoe is undergoing a lengthy preservation process to make sure it survives. I live close to the lake location where it was brought ashore so this information is from conversations with people at the scene. The number of people involved is long. City and state had a lot of archeologists and other key personnel there to direct and help the extraction. The Mayor was there along with other key city department leaders. Divers did the underwater work and brought the canoe to shore including from the Sheriffs Department. Anyone else who knows more details can add to the story in the comments but in summary it was a pretty amazing sight.”