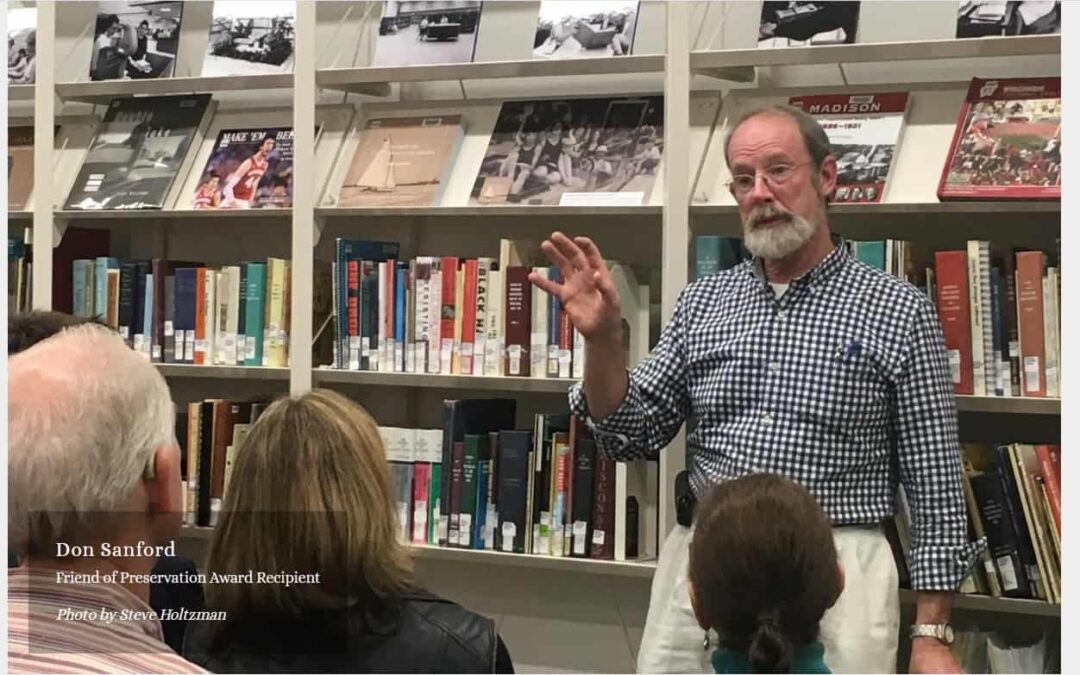 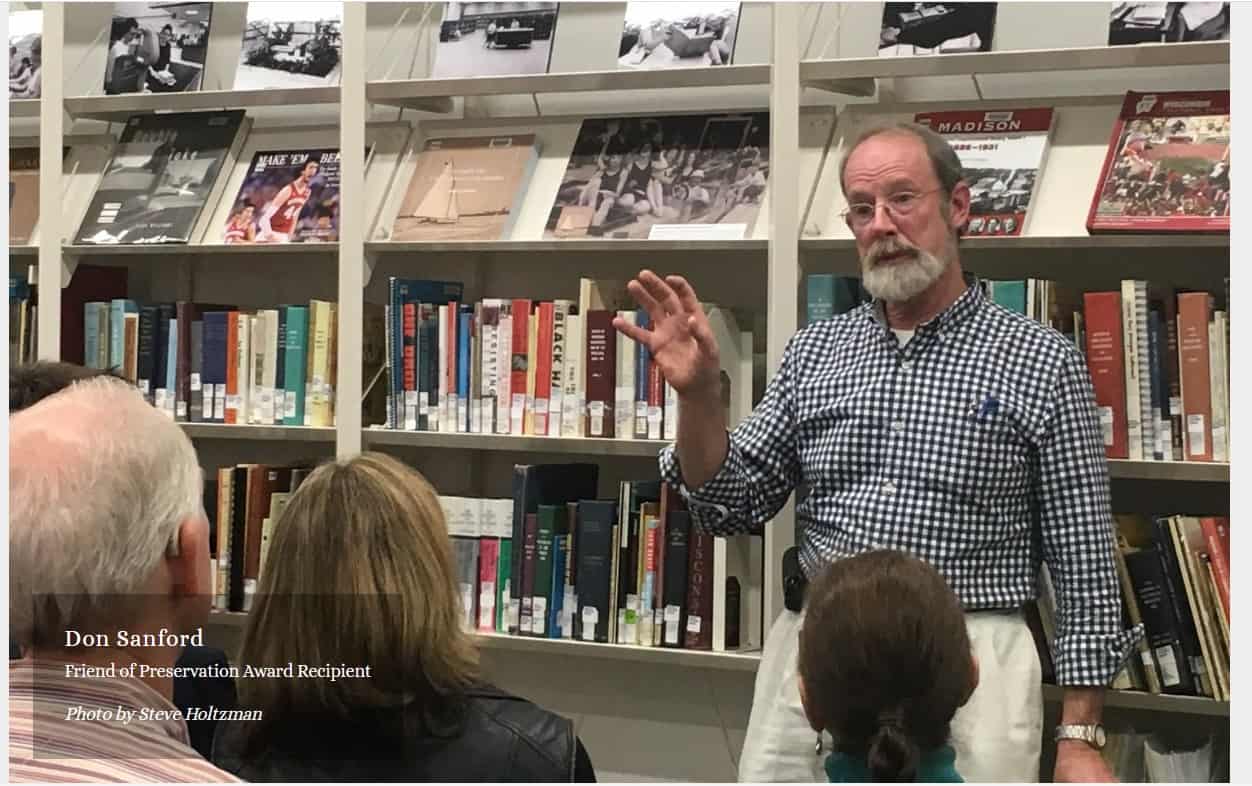 4LIYC Nite sailor, author of On Fourth Lake, and producer of the MARY B, Madison’s Legendary Iceboat documentary (he’s a busy guy!) Don Sanford was recognized last night by the Madison Trust for Historic Preservation as a “Friend of Preservation.” Congratulations Don and we look forward to your next projects. 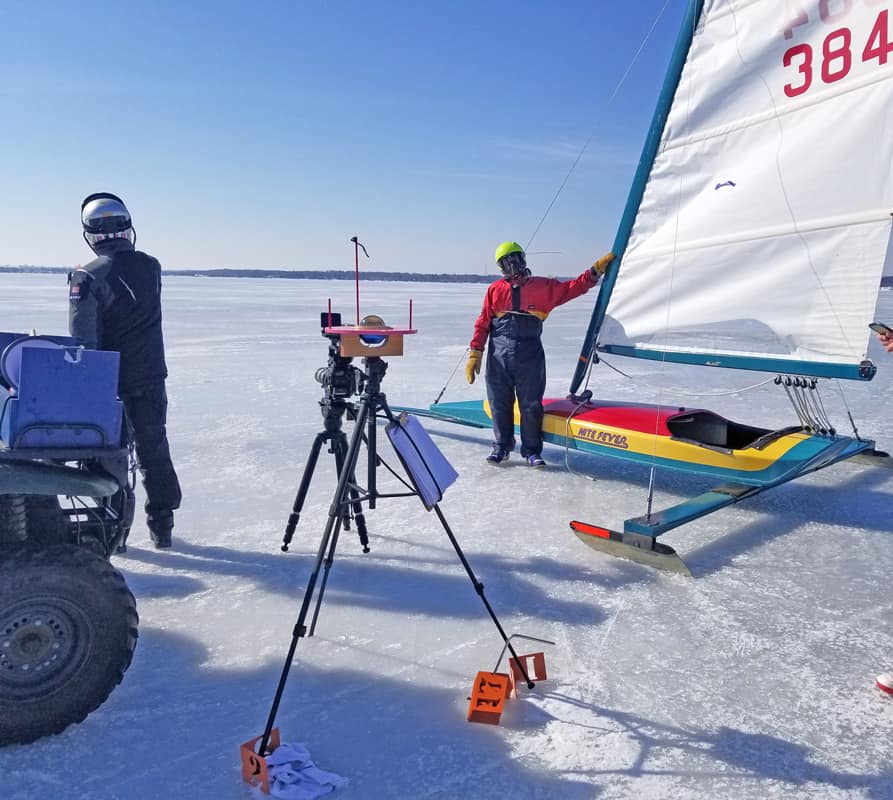 Don Sanford at the one block where it’s always busy with spectators and paparazzi. 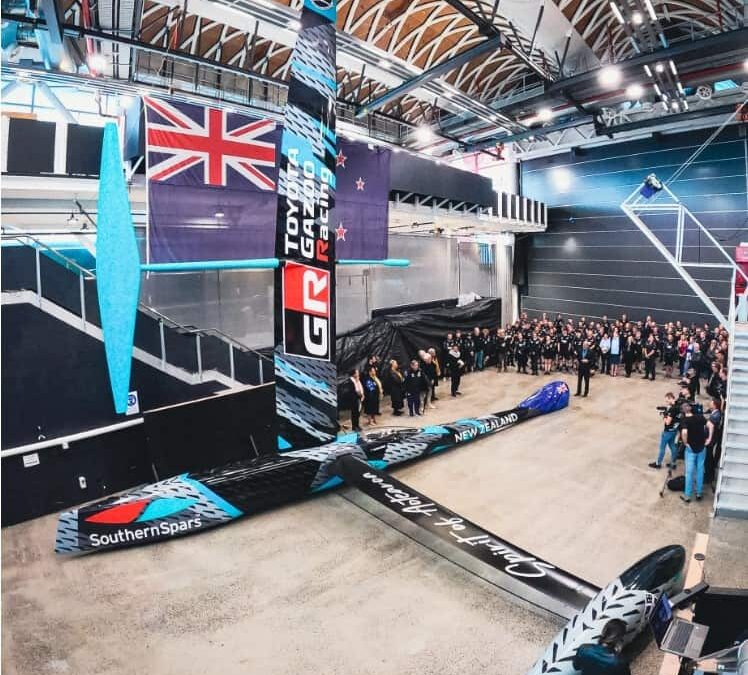 If Darth Vadar Had a Land Yacht 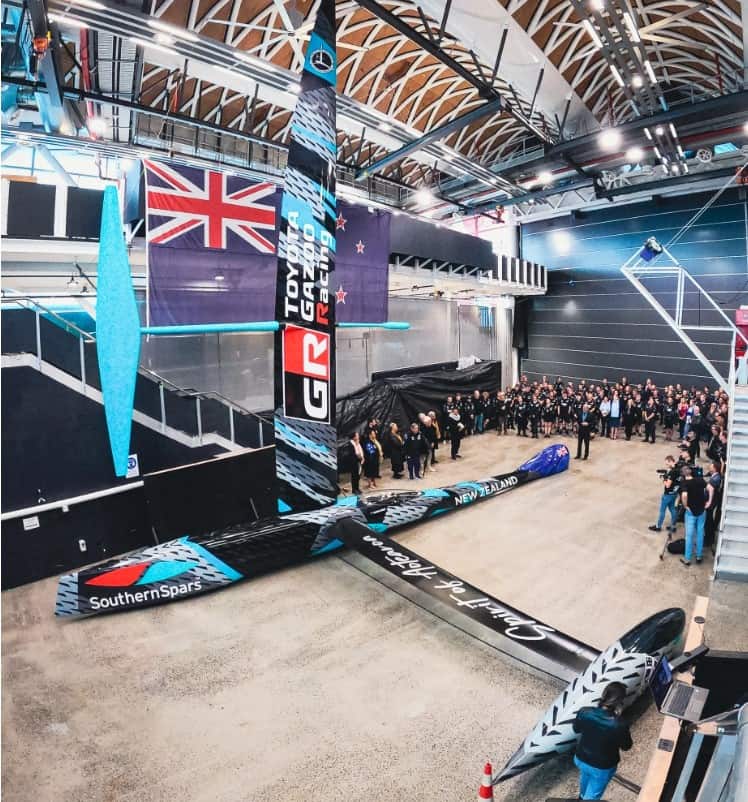 From Rule69 Blog:
If Darth Vader was into land yachting, this would be his chosen vehicle. It’s a truly remarkable feat of boat building and engineering and gives Glenn Ashby every chance of smashing through the magical 126.1mph record set by Britain’s (indeed Lymington’s) Richard Jenkins over a decade ago.

…And crikey, when that weather window does come, it’s going to be full-on to eclipse the mark set. This is one of those records that has stood the test of time. The monumental effort that Jenkins exerted saw him chase the dream for almost a decade with the burning mark of Bob Schumacher’s [one of our own, a DN ice sailor – Ed.] 116mph run that was set in 1999 etched into his ambition.
Read more. 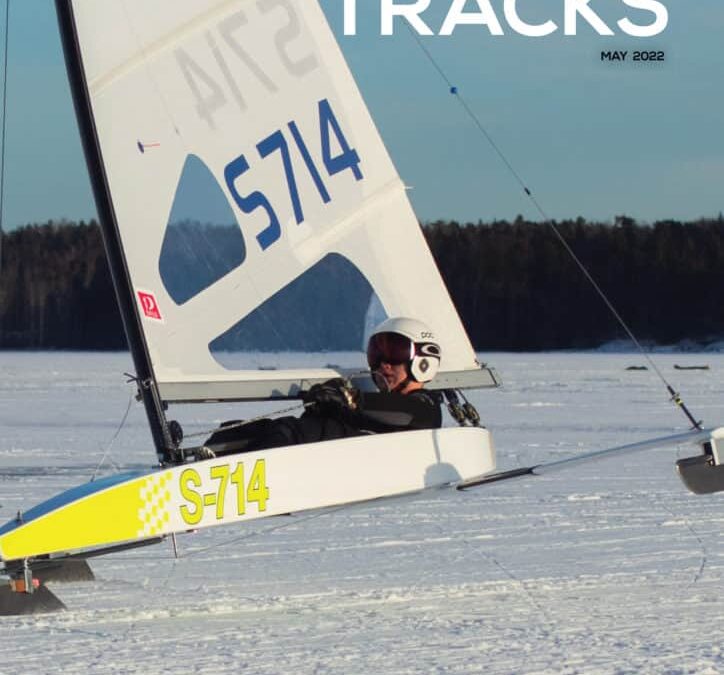 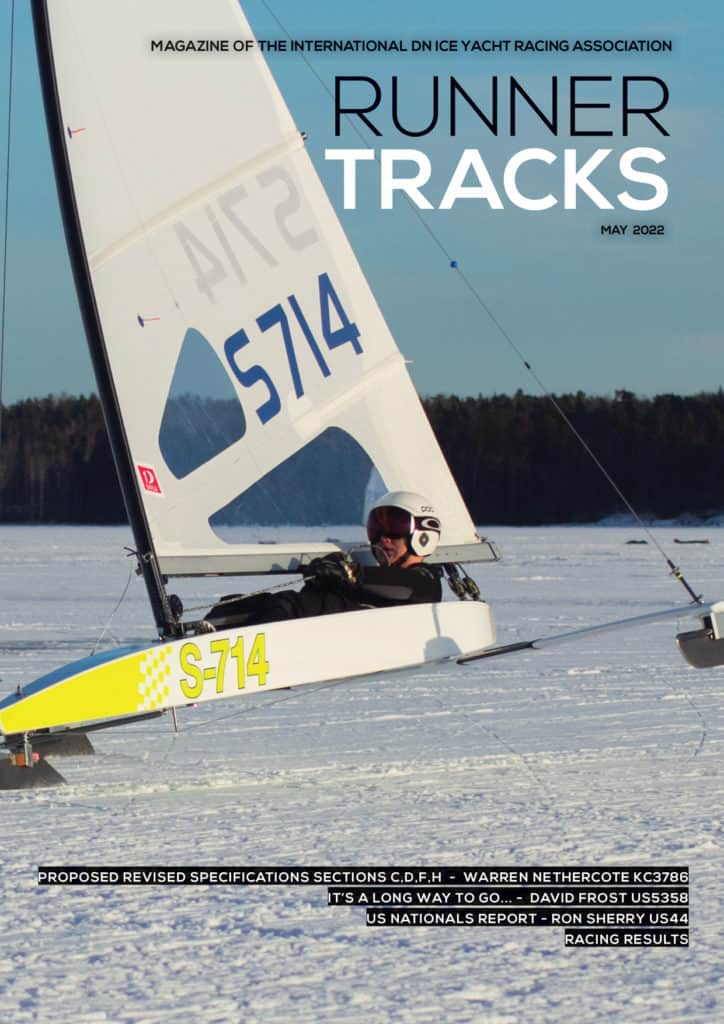 Oskar Svensson  of Sweden at the 2022 DN Worlds. Photo by Anna Pataki.

Are you missing ice sailing and dreaming about ice yet? Relive the season by reading the season-ending DN newsletter, Runner Tracks. Ron Sherry breaks down the DN US Nationals race by race. David Frost shares his adventures of the last-minute decision to attend the DN World Championships in Europe. Plus the best photography by Gretchen Dorian and Anna Pataki. Take a look.

A Life That Dreams Are Made Of

20′ banner made by Tim Stanton.

“He would have hated this.” Billy Mattison reminded the packed room at Gunderson’s Funeral Home about the humble nature of his father, Bill. The memories of Bill shared by those who had preceded Billy were unique and moving. It was a privilege to witness a group of highly accomplished individuals speak in awe of their friend. Here are a few highlights from the people invited by emcee Don Sanford to share their best stories.

Bill organized the building of a new hull for the world’s largest iceboat, Rick Hennig’s DEUCE. Rick recounted that experience with great affection and humor. When Bill saw the semi-truck full of Sitka Spruce roll into the shop parking lot, he turned to Rick and said, “That’s the stuff dreams are made of.”

Bill’s neighbor said that when Bill came over to watch him tinker in his garage, it was “like God himself coming to watch a mere mortal.”

“Yeah, I know a little about that.” America’s Cup veteran, Larry Malik, recalled Bill’s typically understated reply when asked if he could fix a photo processing machine during an AC Australian campaign. Larry shared the famous story of the day Bill took the film of the AC boat to the one-hour photo store, where he learned that the store’s processing machine was on the fritz. Bill fixed the machine and came back with the pictures.

Lon Schoor, Bill’s long-time Mendota Yacht Club A Scow partner, marveled at no matter how complicated the project; Bill was so organized in his thoughts that he didn’t have to write anything down and always made the deadline. He left us laughing with a story about how Bill schemed how they would sell the idea of buying an A Scow to their wives, Donna and Mauretta. Bill told Mauretta that Lon had purchased the boat, while Lon was to tell Donna that it was Bill’s boat.

Dr. Kyle Metzloff, a sailor, ice sailor, and UW Professor of Industrial Metal studies, spoke about Bill’s genius and ability to pick up new and complicated ideas. Having never dealt with computers, he learned to operate a mini CNC mill for creating scale model Mattison Circus parts. At an older age, Bill figured out computers.

Peter Harken shared his amazement at Bill and Paul Krueger’s work ethic. They never wasted a minute, not even in the bathroom where Peter assumed “they had a drill press installed.” Peter acknowledged those who traveled from afar, including New Jersey Skeeter sailor Dan Clapp and America’s Cup alumni from San Diego.

Sailing legend Buddy Melges came to the podium, fixing his steely blue eyes on Mauretta and the family for a full minute, not saying a word, holding the audience in his hand while he made us wait. Buddy spoke about their America’s Cup days and how remarkable it was for a guy who came from the Scow world; Bill could make a 12-meter sail faster. “He did not sail on it, but he made it faster when he worked on it.” (Later, I heard stories in the bar about how at least one of Bill’s modifications caused a stir with some AC engineers, but they calmed down when the boat speed increased.)

“He would have hated this.” Billy Mattison reminded the packed room about the humble nature of his father, Bill. The last to speak at Bill’s Celebration of Life, Billy had to follow some esteemed acts, giants of the sailing world, who had shared stories from the podium of the man’s genius. Billy’s poignant closing remarks emphasized the private family side of Bill and his devotion to his wife of 65 years, Mauretta, their children, Lynn and Billy, and their grandchildren.

“I think it is time for a dipper.”

On our way to Gundersons, Don Anderson and I delivered cakes to the Breakwater for the post-memorial reception sponsored by the Four Lakes Ice Yacht Club and Mendota Yacht Club. The manager surprised us with the news that Mauretta had called with instructions that she would be picking up the bar tab. On Monday, unsure of the damage, the two yacht clubs offered to pitch in with the bill. Mauretta said no, adamant that Bill would have insisted on it. Thanks, Bill.
Debra Rosten Whitehorse

PREVIOUSLY
Home of the Volleyball(?) Champs
Nothing Fickler
Bill’s Circus Life
“The Icing On The Lake”
“Fast Forward Since Birth”
“The Hard-Water Gang” with Bill Mattison at the 2001 ISA
Shooting the Breeze with Bill Mattison
Bill Mattison Inducted into the National Sailing Hall of Fame
Iceboaters Fingerprints
Willy St. Iceboat Shop Archives

“PRINCESS III in action” in front of Fauerbach Brewery on Lake Monona.

For over a hundred years, the Fauerbach family have been Four Lakes Ice Yacht Club members and officers. The epicenter of Madison iceboating ran across the isthmus from the Bernard Boat Shop on Lake Mendota to the Fauerbach Brewery on Lake Monona. Until the brewery was closed, 4LIYC members gathered in the brewery’s elaborately carved bar for a “cold dipper” to talk smart and conduct club business. Peter Fauerbach has written a book about his family, the brewery, the social history of Madison, and the Fauerbach’s iceboats. Peter’s book is a must-have for iceboating, beer, and Madison history fans.
Buy your copy online here. 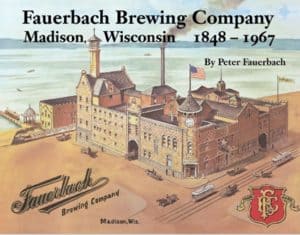 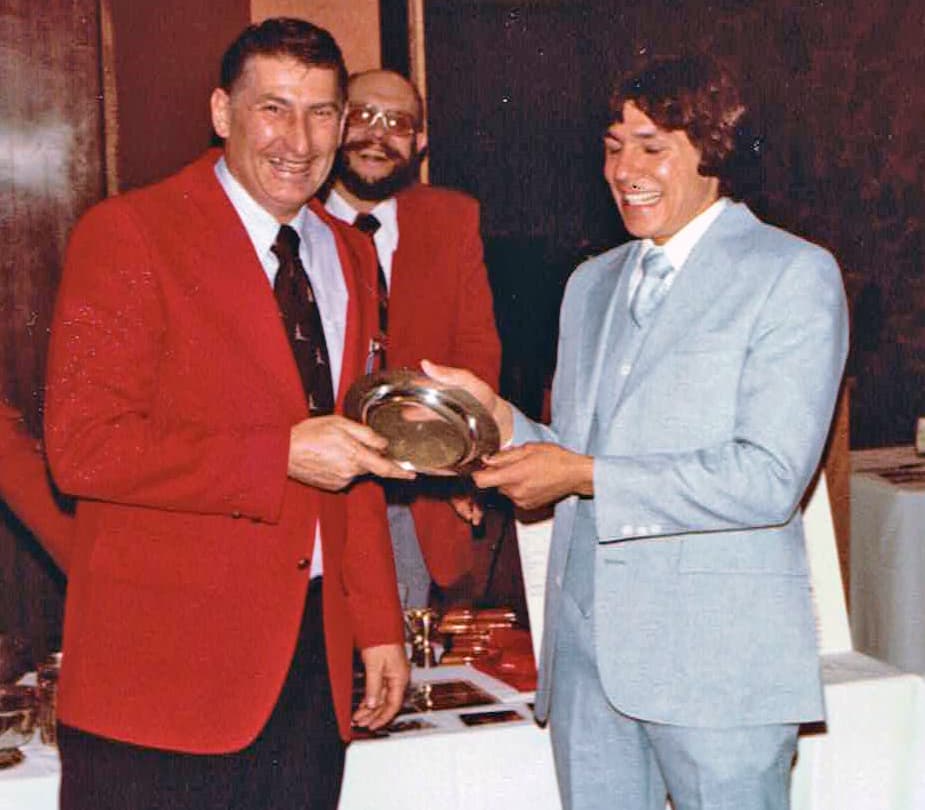 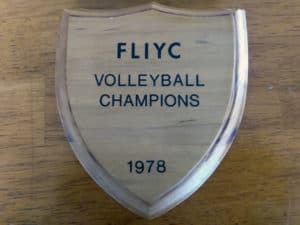 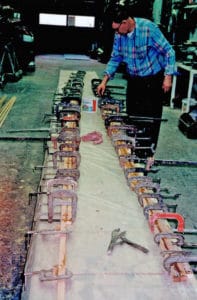 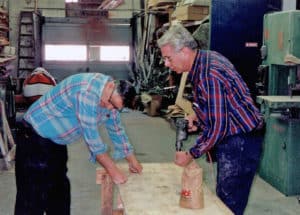 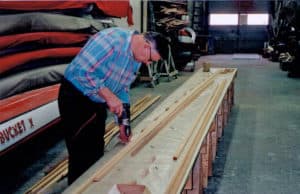 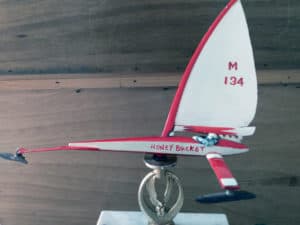