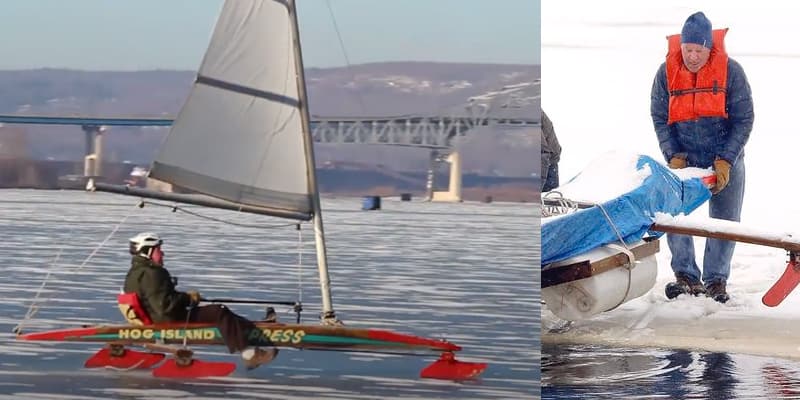 Earlier this week, there was an enjoyable story on the Duluth Tribune website about area ice sailors who took advantage of a snow-less December to sail Superior Bay. “Nice ice for sailing on Superior Bay” featured a boat called the “Hog Island Express”.

“Everybody around here builds their own boats… I think I spent $50 total building the Hog Island Express,” Hom said, noting the name comes from the island along the Superior side of the harbor. That’s where Hom found the huge white pine up on shore. He floated it back to Park Point, eventually had it milled and used part of the lumber for the ice boat.

A storm came through on Thursday ending their season and almost sent the iceboats drifting away.

Thursday a neighbor called Strange to tell him “Your boat is leaving.” With the help of friends and neighbors, and using plastic barrels for flotation and a long rope, Strange rescued his and another person’s ice boats.

Thankfully, the outcome was a happy one. They did a safe and commendable job rescuing the boats. Take look the pictures here.